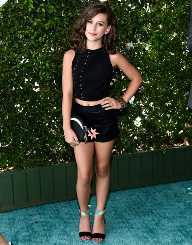 Madyson Shipman was born on the 20th of November 2002 in Kings Mountain North Carolina.

She had always wanted to be in the performing arts. She started as a two-year-old entertainer. She performed what she termed shows for her family and local day-care. From the age of four, she began to inform her mother of her desire to be in the performing arts. Her mother assumed she would outgrow it but she never did. She kept insisting until she was six years old. She finally wore her mother down till she said they would try it. They attended the AMTC acting convention together in winter 2008. She got an agent and moved to New York. Madyson is currently being represented by Shirley Grant Management in New York and  J. Pervis Talent Agency in Atlanta

Through the agency representing her from 2008, Madyson started acting professionally at the age of six. She began her recurring sketch in Saturday Night Live in 2009. She appeared a three times between 2009 and 2011. She also got some roles acting on stage and one episode of Sesame Street. She got her first break when she booked a role on the Broadway show Enron in 2010. She also made an appearance as Maddie in the television movie Modern Love in 2012.

Madyson’s big break came when she booked the Nickelodeon hit show Game Shakers. It is a show about two teenagers who accidentally created a multi-million dollar gaming company from what was meant to be a school project. The show is created by Dan Schneider who is responsible for many of the best Nickelodeon shows.

The show revolves around Babe and Kenzie, played by Cree Ciccino and Madyson Shipman.

Game shakers began running its first episode in September 2015. It has run two seasons and has geared for a third season.

Alongside her role in the Game Shakers, Madison has played a voice role as Violet in the Peanut movie in 2015. She also made an appearance as Salome in the 2016 comedy drama movie, Ordinary World.

Madyson is an all-round performer with a budding music career. She plays numerous instruments. Guitar, ukulele, keyboard, a bit of Base and she sings. She began writing songs and playing the guitar since she was eight. She sings and plays her musical instruments to her healthy fan following of over six hundred and fifty six thousand followers on Instagram.

She has also been featured in commercials for, Blue Cross, Blue Shield, Berkeley College, My Little Pony, Kleenex, Kodak etc. She says she hopes to become a neurosurgeon someday. She also hopes to learn a little bit of Coding from Kenzie. She has participated in Girls Who Code. This is a movement that tries to encourage girls between the ages thirteen and seventeen being the age they most lose interest to gain interest in coding.

Madyson moved to California in 2015 after she booked the role in Game Shakers and she currently lives there. She had previously lived in New York for seven years.

Madyson has had her fair share of embarrassing teenage crushes. She had an embarrassing crush on a co-actor on Game Shakers, Thomas Kuc. He played the not so intelligent member of the team, Hudson, who was allowed to stay because he was cute. She once suffered an embarrassing fall and injury after Thomas said one time that she was his preference for a girlfriend.

It appears she is over that crush now because she began officially dating Logan Patrick since January 6th, 2016.