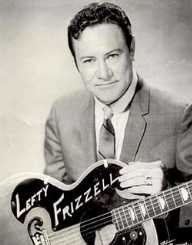 William Orville Frizzell known also known as Lefty Frizzell was an American country music singer and songwriter. Born on March 31, 1928, he is one of the most influential and successful country music singers. Frizzell rose to fame in the 1950s after releasing major hits like "If You've Got the Money (I've Got the Time)" (1950), "I Love You a Thousand Ways" (1950). Following its success, he released other hit songs like "Give Me More, More, More (Of Your Kisses)" (1952) and "Saginaw, Michigan" (1964). As a prominent artist, Frizzell influenced several other country musicians including, Willie Nelson, George Jones, and Merle Haggard. In 1982, Frizzell received induction into the Country Music Hall of Fame.

William Orville Frizzell was born on March 31, 1928, in Corsicana, Central Texas. He was the first of eight children. His father was an oilman. The later family moved to El Dorado in Central Texas. Growing up Frizzell picked the nickname Sonny up but later changed it to Lefty. Frizzle gained interest in music as a child and became highly influenced by Jimmie Rodgers. He since began listening to songs by Rodgers. His later influences include Ted Daffan and Ernest Tubb. With this strong interest in music, he launched his professional music career in his youth. He also received a spot on the local radio-station KELD El Dorado. Throughout his teen, he performed in nightclubs and participated in talent shows.

Frizzell had sex with his underage age fan in 1947, causing his arrest. He was a married man during this period. His wife Alice Harper whom he married in 1945 became very affected by the development. Filled with guilt and regret, he wrote apologetic poems to his wife while in jail. One of these poems later became his first major hit.

Following his release in 1949, Frizzell drifted away from music and joined his father in the oilfield. However, he soon returned to it by performing in nightclubs. Subsequently, he earned a regular gig at the "Ace of Clubs" in Big Spring, Texas. It was during this period that Jim Beck, who owned a local recording studio, discovered Frizzell. Beck, therefore, offered him some free demo at his studio. He sent cuts of these demos to record labels, which ultimately earned Frizzell a contract with Columbia Records.

In 1950, Frizzell’s "If You've Got the Money (I've Got the Time)" became an instant hit. The two-sided record contained a song "I Love You A Thousand Ways," which he wrote to his wife while in jail. The song became very popular propelling him to stardom. Frizzell later worked on his vocal and perfected his guitar skills, making him great to listen to. His third single “I Want to Be With You Always” stayed No.1 on the chart for 11 weeks. Frizzell's popularity surged with his back to back hits. By 1951, his popularity was at pal with Hank Williams, whom he toured with. He released, "Mom and Dad's Waltz, "Travelin' Blues," and "Give Me More, More, More (Of Your Kisses) in 1951. All these tracks became instant hits.

As a top performer, he performed on The Grand Ole Opry and The Louisiana Hayride. Frizzell continued releasing top hit music throughout 1952. That year he released "How Long Will It Take (To Stop Loving You)," and "Don't Stay Away ('Till Love Grows Cold)." Others include "Forever (And Always)," and "I'm An Old, Old Man (Try'n'a Live While I Can)."

Notwithstanding his enormous success in the 1950s, Frizzell began to decline. After firing his manager and abandoning his band, he joined the Grand Ole Opry. However, he left after a short while. He became a spendthrift. However, he intermittently released some hit songs. Such works include “The Long Black Veil, 1959, and the No.1 hit “Saginaw, Michigan” in 1964.

The latter earned him a Grammy nomination. In 1965, his "She's Gone, Gone, Gone" reached the Top 20 hit. Although he wrote several songs, Columbia decided to release just a few. His sales had declined and performed fewer gigs. This caused his movement to ABC Records in 1972. He eventually suffered a deteriorated voice.

Frizzell became not only wasteful but also alcoholic. He developed high blood pressure. He died on July 19, 1975, of a stroke at age 47. Frizzell was buried at Forest Lawn Memorial Gardens in Goodlettsville, Tennessee.

Frizzell received induction into the Nashville Songwriters Hall of Fame in 1972 and into the Country Music Hall of Fame in October 1982. Frizzell influenced the lives of several country music artists.