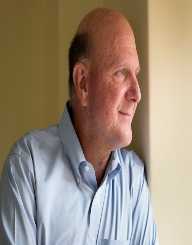 Steve Ballmer is known as an entrepreneur and former CEO of Microsoft where he served from 2000 to 2014. Before fame, he was ranked in important positions at Microsoft department. He once served in the operating systems department as well as sales and supported wing. Not to mention he acted as the Executive Vice President and later the President of Microsoft.

Steve Ballmer was lucky to meet Bill Gates while he was still in college. But Steve first became part of Microsoft before Bill Gates. Ballmer became the first Microsoft Manager under Bill Gates. Hailing from a well-to-do family, he turned out to be an extraordinary being. Although he loved other subjects, he loved mathematics to the core. From one success to the next, Steve is now the owner of Los Angeles Clippers Basketball Team.

On 24th, March 1956 Steve Antony Ballmer was first seen in the world in Detroit, Michigan, the United States. His father was called Frederic Henry Ballmer, and his mother was known as Beatrice Dworkin. Steve has a younger sister named Shelly.

At first, Steve Ballmer joined Detroit Country Day School where he passed out with excellence. He was accepted at Harvard College where he graduated with a significant distinction in economics and mathematics in 1977. It was at Harvard University that Steve met Bill Gates and they became close friends. In spite of being an exceptional student, Ballmer came to excel in sports. It was here that he joined The Harvard Crimson Football Club.

After the completion of his studies at Harvard, Steve Ballmer went to serve as an assistant product manager at Procter & Gamble Corporation. He remained in the seat for two years. In 1979 he teamed up with Stanford Graduate School of Business.

Steve’s college friend, Bill Gates had already dropped out of school where he went to co-establish Microsoft. After a year of studies at the School of Business, Bill asked him to work as the managing director of the company. He signed off from his business studies in 1980 where he joined Microsoft and became the first operational manager to work under Bill Gates.

It was during his service at the corporation that Steve Ballmer came to recruit competent gurus as the firm continued to develop. Although he wasn’t good when it came to programming, Ballmer could spot prospective positions and ranks.

Afterward, Microsoft Corp. came to sign an agreement where they created IBM’s operating systems in personal computers. Ballmer acted as the chief decision-maker of the said project. At the end of it all, he received positive results from the consumers.

In the mid of 1980, Paul Allen’s health started to deteriorate when he was diagnosed with cancer in 1983. This made him resign from his position. As a result, Gates and Ballmer took over as the leading personnel of Microsoft. Steve Ballmer acted as the chief operating officer.

In 1986 Ballmer’s career took another turn when Microsoft was declared as leading company in the USA. This made him sign many contracts, and in the process, he was named as the next billionaire in the U.S.

Steve majored in works such as making office application, spreadsheet, and software presentation.

For a while, Steve Ballmer held vital positions in Microsoft. Some of the notable once include his service as the Executive Vice President as well as the establishment of.NET Framework. In 1998 he was appointed as the President of Microsoft until the end of 2001.The following year he was ranked as the Chief Executive Officer of Microsoft.

As the acting CEO, Ballmer saw himself as the chief handler of Microsoft’s operations and finance sector. Under his management, Microsoft Company extended its activities such as the introduction of Xbox systems and space-saving media players. In 2014 Steve Ballmer resigned as the CEO of Microsoft.

Steve Ballmer received a high ranked position where he was named as the Knight of the Legion in Paris.