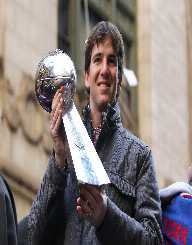 Elisha Nelson "Eli" Manning is the Super Bowl Winning Quarterback for the New York Giants. He is the youngest of the Manning Siblings, children of NFL quarterback Archie Manning. His oldest brother, Cooper Manning is the host for the show "The Manning Hour" for Fox Sports and part of the team of Fox NFL Kickoff. His second brother Peyton Manning is a former Indianapolis Colts quarterback.

Eli Manning was born in New Orleans, Louisiana, on 3rd January 1981 to parents Archie Manning and Olivia Williams. As the youngest child in the family, he was closer to his mother when Archie traveled. Hence, Eli learned a lot of qualities, such as the ability to stay calm in a crisis. His nickname in the family is “Easy” because he could, like his mother, be the easygoing person when things go wrong.

His position as a quarterback started during childhood, where his firm arm proved to be useful despite not being the fastest. By the time Eli Manning entered Isidore Newman High School, life as a brother of a famous quarterback had begun.

In Isidore Newman High School, he played quarterback and was fiercely recruited by football teams. He chose University of Mississippi (Ole Miss) in Oxford, Mississippi due to David Cutcliffe, the coach who helped his brother Peyton improve his game.

In Ole Miss, he played quarterback for the Rebels. His record was 10,119 passing yards a passer rating of 137.7, and 81 touchdown passes.  He had won his team many games in the four years that he studied in Ole Miss. Eli Manning graduated Business Major with a GPA of 3.6. He is a member of Sigma Nu fraternity and was Sigma Nu Athlete of the Year for 2001 and 2003.

After Ole Miss,  2004 saw Eli Manning drafted by San Diego Chargers but was traded off on draft day by New York Giants. He was benched during his rookie year in favor of Kurt Warner. Under Tom Coughlin, the new coach, Eli Manning led the team to average results over the next three seasons. This led to a 25-23 record with two playoff appearances.

In 2005 and 2006 the Giants made the playoffs, but Manning led them through playoffs and into 42nd Superbowl. The team won, and Eli was made MVP, where the Mannings made history. He and Peyton Manning became brothers who won Superbowl and MVP Quarterbacks back to back.

Eli Manning had also made history by becoming the first quarterback to throw for more than 4,900 yards and win a Super Bowl. With that, he had made The Giants the first team with a running game ranked last, and a defense ranked as low as 27th to win a Super Bowl.

Eli Manning is still playing for the New York Giants. This would be his 13th season.

Eli and his brother Peyton volunteered to help victims of Hurricane Katrina to get back on their feet. Together they delivered essentials to the people of New Orleans. Their father Archie had also raised funds for relief efforts after Katrina. He also undertook a five-year campaign to raise US$ 2.5 million for University of Mississippi Medical Center's Blair E. Batson Hospital for Children, where the money was used to build a children’s clinic. The clinic is named after him

Eli Manning became the host of Guiding Eyes for the Blind’s Golf Classic, a nonprofit guide dog school since 2008. He appeared in a commercial to raise awareness for the Deepwater Horizon oil spill. He is involved in Red Cross with his mother, Olivia.

Eli Manning met his future wife, Abby McGrew in Ole Miss, where he was a junior and she the freshman. He proposed in 2007, and the couple married in a private ceremony in San Jose del Cabo, Mexico in 2008.The couple has three daughters: Ava Frances, Lucy Thomas, and Caroline Olivia.

Eli Manning continues the Manning family legacy. His brother Peyton played four Superbowls and won two, while he won two out of the two. In total, the Manning brothers were in six out of years in the ten years of Superbowls. In 2006, the two brothers clashed on the field as the Giants played the Indianapolis Colts. Peyton won that game 26-21 as the more experienced quarterback.

In 2009, Eli, Peyton, and Archie Manning co-authored Family Huddle. The book is for a kindergarten to Grade 2, telling about how the Manning children played football, showing their good memories from their days in Louisiana and Mississippi.