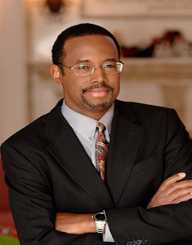 Benjamin Solomon Carson is an American author, neurosurgeon, and politician. He is the current United States Secretary of Housing and Urban Development, under the Trump administration. He was born in Detroit, Michigan, on September 18, 1951, into the family of Sonya and Robert Solomon Carson. He worked as a neurosurgeon at the John Hopkins Hospital, and he‘s the first man to separate conjoined twins successfully.

Ben Carson is the second son of Sonya and Robert, in Michigan. Robert was a Baptist minister and factory worker, who married Sonya when she was thirteen, was raised by his mother after she divorced Robert. Ben was eight at that time, and the divorce was due to Robert having another secret family.

Growing up for Ben Carson wasn’t easy. He got angry easily. His raging temper usually resulted in physical violence. He claimed to have almost hit his mother with a hammer once! But he later realized the error of his ways after reading the book of Proverbs in the Bible. He tried to stab a friend but missed. It was after this he ran home and locked himself in the bathroom with a Bible, and started praying. This was the beginning of a new lifestyle for Ben.

Ben Carson started kindergarten at the Fisher school in 1956. He was an average student till his third grade. It was at this time his mother found out about his father’s secret family. He moved with his mother and brother to his aunt’s place in Boston. He spent two years at a two-classroom school in the Berea Seventh-day Adventist church. The school had just two teachers who taught eight grades and spent most of the time singing and playing games.

He later returned to Detroit public schools. His performance was bad at first but improved after his mother limited his TV time. She made him write book reports on two library books per week.

Ben Carson wanted to be a missionary doctor when he was eight, but later got fascinated by the lucrative lifestyle of psychiatrists shown on TV. He attended the southwestern high School for his ninth to twelfth grade, ranked third in his class during graduation.

Ben Carson attended the Yale on a full scholarship and graduated with a B.A in psychology in 1973. Although he wasn’t at the top of the class, he had a good grade point average. He then entered the University of Michigan medical school that same year. After taking comprehensive exams and performing poorly, his was advised to drop out or take a reduced academic load. Instead, he continued with the normal academic load and his grades began to improve. He graduated in 1977 with an M.D. in medical school.

After graduating from medical school, Ben Carson became a neurosurgeon at John Hopkins Hospital, Baltimore, in 1977. He was a great surgeon and was offered a job at Sir Charles Gairdner Hospital in Perth, Australia. At that time, Australia was lacking expert neurosurgeons. Ben accepted the offer. In 1984, he returned to John Hopkins Hospital and was made the director of pediatric neurosurgery a year later. He was also made the co-director of the John Hopkins Craniofacial Center. He was 33 years at that time.

In 1987, Ben Carson did the impossible leading a team of doctors in separating the seven-month conjoined twins successfully in Germany. He performed another separation surgery in South Africa in 1994 but wasn’t successful. Both babies died. He later performed another surgery successfully in Zambia, where both twins survived. The surgery lasted for twenty-eight hours. This success didn’t last as he failed with a team of hundred doctors to separate two conjoined Iranian women. The two ladies, 29 years, died shortly after the surgery.

Ben Carson was the first neurosurgeon to separate a set of conjoined twins successfully. This he achieved with a team of seventy doctors. The operation lasted for twenty-two hours and was on September 4, 1987.

Ben Carson is married to Lacena Candy Rustin. They met in 1971 and were both students of Yale. He got married in 1975 and has three sons, Murray, Benjamin Jr., and Rhoeyce.

Ben Carson was diagnosed of prostate cancer in early 2000 but is now fully recovered.

Ben Carson is a member of the Seventh-day Adventist church.

Ben Carson started the Carson Scholars Fund with his wife in 1994. This scholarship is meant for students with academic excellence and good humanitarian qualities.