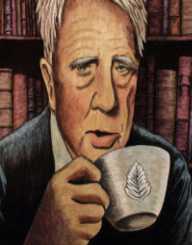 American poet and playwright Robert Lee Frost was born in San Francisco, on March 26, 1874. His father was a teacher and later became a journalist for the San Francisco Evening Bulletin. He then became the editor of the newspaper. Frost’s father died in 1885, and after this, the family moved to Massachusetts.

In 1892, Frost graduated Lawrence High School. He published his first poem in the school’s magazine. After finishing high school, Frost went to study at Dartmouth College but stayed there only for two months. He returned home and started to help his mother with teaching and as a worker in a factory.

Robert Frost worked several different jobs to support himself, although he knew that he wanted to be a poet. In 1894, Frost made his first sale to New York Independent. He sold his poem for $15. From 1897 till 1899 he attended Harvard University but was forced to leave due to illness.

Before his death, Frost’s grandfather had purchased a farm, which he left for him to run. Frost worked on the farm for nine years, writing poems in his spare time. During his time at the farm, Frost wrote many poems about the simple life. His poems “The Tuft of Flowers” and “The Trial By Existence” were rejected by many publishers. His farming career was not successful, and he subsequently returned to teaching English in Hampshire’s Pinkerton Academy and later at New Hampshire Normal School.

In 1912, Frost and his family sailed to Great Britain. Frost hoped that in Britain he would find someone willing to publish his work. They settled outside of London. He made several acquaintances, most important of them - Ezra Pound and Edward Thomas.

During this time, Frost wrote his first poetry book A Boy’s Will and published it the next year. The following year, Frost published another book. His time in England was auspicious, but since the World War I broke out, his family had to go back to the United States.

Back In The States

Upon his return to the United States, A Boy’s Life had already been published. Frost bought a property in New Hampshire and launched his writing, teaching and lecturing career. He was a teacher in University of Michigan, Amherst College, and Dartmouth.

Frost’s publisher Henry Holt released a new book Mountain Interval - a collection of poems during Frost’s time in England. Before his fame, Frost had sent his poems to The Atlantic, which rejected him. Now the newspaper was calling him to publish, and Frost sent them the same poems he posted before.

In 1961, Frost was invited to read a poem for the inauguration of John F. Kennedy. At the time, he was 86 years old, and his vision was not as high. He was not able to read the poem he intended to read, and instead, he recited the well-known poem The Gift Outright. Frost died two years later.

In 1924, Robert Frost won his first Pulitzer Prize for his book New Hampshire: A Poem with Notes and Grace Notes. He earned additional three Pulitzer prizes in 1931, 1937 and 1943. In 1960, he also received the Congressional Gold Medal. Frost was awarded Harvard’s honorary degree in 1965. Altogether, Frost has won as many as 40 honorary degrees, most mentionable, from Cambridge, Princeton as well as Oxford universities. He is also the only person who has two honorary degrees from Dartmouth College.

Robert Frost’s own life was filled with a lot of loss. His father died of tuberculosis when Robert was only eight years old. The family was left with almost nothing. In 1900, his mother died of cancer. His family had a history of mental illness, and Frost had to admit his younger sister to a mental institution. He and his mother suffered from depression, and his daughter was also agreed to a mental school in 1947.

Robert Frost first asked his future wife Elinor to marry him, when he sold his first poem in 1894. She wanted to finish college, and after graduating, she said yes. They had six children. Frost’s oldest son Elliot died of cholera when he was eight years old. His other son Carol committed suicide in 1940, and his last daughter died a few days after birth in 1907. Frost’s wife had problems with her heart for all her life. In 1937, she was diagnosed with breast cancer and died the following year.