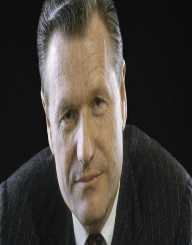 Nelson  Rockefeller was an American Businessman and politician, born on July 8, 1908. He held several political positions and became the 41st Vice President of the Under States under the administration of President Gerald Ford. He was the Governor of New York from 1959 to 1973 and held several other positions under the administrations of President Franklin Roosevelt, Dwight Eisenhower, and Harry S. Truman. His political ideology was liberal and progressive. Being a member of the rich Rockefeller family, he had an early career at the Rockefeller Center.

He was the Chairman and president of the Rockefeller Center, Inc and is highly acclaimed for his expansion of the State University of New York. He founded the Rockefeller Brother Fund in 1940 with his brothers and the American International Association for Economic and Social Development in 1946 to enhance his philanthropic works.

Nelson Rockefeller was born to John Davison Rockefeller Jr. and Abigail Greene. He was the second child of six children by his parent. He had his elementary education at the Lincoln School. He continued the Dartmouth College and graduated with An A.B in economics. Whiles there, he was a member of the Casque and Gauntlet, Phi Beta Kappa and Zeta Chapter of the Psi Upsilon.

Nelson  Rockefeller was absorbed into his family business as soon as his completed his education. He worked in Chase National Bank, Rockefeller Center, Inc and Cole Petroleum in Venezuela a subsidiary of Standard Oil of New Jersey from 1935 to 1940. During his time at the Rockefeller Center, Inc, he was a board member in 1931, served as the president in 1938 to 45 and 1948 to 51 and again in 1956-58. Rockefeller also held several positions at the Museum of Modern Art.

Aside from his private business career, Nelson Rockefeller was also involved in public service and held various positions. Having developed an interest in Latin American because of his stay in Venezuela, he was appointed by President Franklin D. Roosevelt to the position of Coordinator of Inter-American Affairs (OCIAA). This was to curb the Nazi influence and fast dominance in the region and enhance cooperation and good relationship with the US.

During that time the US also used Hollywood to promote the Good Neighbor Policy which was to enhance positive relations with Latin America. To safeguard this, Rockefeller intervened and asked for changes in the movie Down Argentine Way, which he seemed offensive to that country. After serving his term in OCIAA, he was appointed Assistant Secretary for American Republic Affairs in 1944. It was during his term that he started the  Inter-American Conference on Problems of War and Peace in 1945 which later adopted the Act of Chapultepec.

The act was to ensure that the involving nations become each others keeper in terms of economics, social and defense. After Nelson  Rockefeller had convinced his father to donate a New York land for what is now the United Nations Headquarters, he was part of the US delegation to United Nations Conference on Internationalism Organization in San Francisco. It was at the conference that the UN was convinced to build its headquarters in New York.

Nelson Rockefeller was relieved of his position during President Henry S. Truman’s administration and so returned to New York to serve as the chairman of the RockerfellerCenter, Inc, in 1945. Still having his inter-regional corporation at heart, he formed the American International Association for Economic and Social Development (AIA), 1946, and the International Basic Economy Corporation (IBEC), 1947 to continue with that initiative. Whiles the AIA was for philanthropic works, the IBEC was business centered and was to lure investors into underdeveloped countries to boost their economies.

Nelson Rockefeller in 1950 was appointed by President Trueman to serve as Chairman of the International Development Advisory Board, which was tasked to implement his Point IV program. He was also appointed by President Dwight D. Eisenhower in 1952 to serve as Chairman of the Advisory Committee on Government Organization. He also served as Assistant to the President for Foreign Affairs in 1954, during which he brought up several initiatives. In 1956 he resigned from the federal government.

Nelson Rockefeller was elected the governor of New York in 1958, a position he held four consecutive terms till 1970 when he resigned three into his fourth term. He made giant strides when it comes to health, education, transportation, environmental protection, welfare, housing, etc.

It was during his term that the State University of New York was strategically positioned as the largest University in the US. His deliberate policies and interventions grew the University’s campuses from 29 to 72 increasing enrollment to 232,000 full-time students from the previous 38,000.

Nelson  Rockefeller also builds upon the primary and secondary education. He established the New York Development Corporation to provide lower income housing and was able to deliver over 88,000 of such houses. Other initiatives include welfare and Medicaid, civil rights, reduction of crime by doubling the state police number, though drug laws and many others.

Nelson  Rockefeller assumed the Vice Presidential slot when President Nixon resigned in 1974. The then vice president, Nexon Ford took over the presidency and nominated Nelson Rockefeller as his vice. Despite several oppositions to his nomination, he was confirmed and took the oath of office on December 19, 1974. Even as the vice president, he complained to have been sidelined and was not given an active role in the decision making of the administration.

Nelson Rockefeller died on January 26, 1978, from a fatal heart attack at his office at the townhouse. He is said to have died in the presence of his aide Megan Marshack. It was reported that the ambulance was not called immediately but after an hour of the incidence. Instead, Mashack called her news reporter friend Porchetta Pierce to the townhouse. It was Pierce who rather called the ambulance later. There were several rumors speculated about the death. However, Rockefeller’s family declined the request for an autopsy. His remains were cremated.