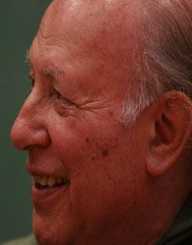 Imre Kertész is a Hungarian novelist who is a recipient of a Nobel Prize in Literature. He was also a survivor of during the infamous Holocaust from which he based the theme of his works. He died in Budapest at the age of 86 on March 31, 2016.

Imre Kertész was born on November 9, 1929, in Budapest, Hungary to Jewish bourgeois couple named László Kertész and Aranka Jakab Kertész. His parents divorced when he was five years old when he started boarding school. At the age of 11, he attended secondary school and was transferred to a class specialized for Jewish students.

The impending World War II suddenly made an entry in Imre Kertész' life. At the age of 14, he was sent to the infamous concentration camps at Auschwitz with fellow Hungarian Jews then relocated to Buchenwald. When Kertész arrived at the camps, he avoided imminent extermination by hiding his real age. At the time, 14-year-olds were sent to their deaths along with others, but Kertész managed to escape by stating that he was a 16-year old laborer.

Liberation and Return to Budapest

Imre Kertész' camp attained freedom in 1945, and he returned to his Budapest home. He resumed his education and graduated from high school in 1948. Upon graduation, he started working as a translator and journalist. He translated works of Friedrich Nietzsche, Sigmund Freud, and Ludwig Wittgenstein from their native German to the Hungarian language. He worked at the Világosság Journal for a time but lost his job after the Világosság took a leaning towards communism.

Kertész and the Fatelessness Trilogy

Imre Kertész rose to fame for writing Fatelessness (Sorstalanság) which tells the story of 15-year old György’s experience at Auschwitz, Buchenwald, and Zeitz during the Nazi concentration camps. The novel was said to be written sometime between 1960 and 1973. It was published in 1975, but prior attempts have been made to release it sooner had it not been rejected by the Hungarian Communist regime.

Later on, Kertész published two other books as a continuation making the series trilogy. The second book was entitled Fiasco which was published in 1988 followed by the 1990 publication of Kaddish for an Unborn Child that completed the trilogy.

In 2002, Imre Kertész received the Nobel Prize for his work on Fatelessness. This made him the first and only Hungarian Nobel Prize winner as of yet, but he was put under controversy since he started residing in Germany then. Nevertheless, the success of his book was later adapted into a film in 2005.