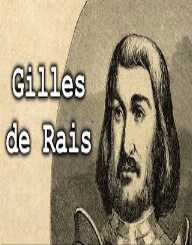 Gilles de Rais was born on September 4, 1404. He was a lord and knight of Anjou, Poitou, and Brittany. He also became an infamous serial killer of children. He was sentenced to death and hanged at Nantes for the murder of many children.

Gilles de Rais was born on September 4, 1404, in the family of Guy II de Montmorency- Laval and Marie de Craon in their family castle at Champtoce-Loire. When he was nine years old, his father died. His mother later left him, and his brother, Rene de La Suze went she went to remarry. They were brought up by their grandfather, Jean de Craon. In 1415, Gilles’s maternal uncle died, and he became the heir of the entire fortune of his maternal grandfather.

In 1420, Gilles de Rais was regarded as a brave soldier when he fought for the House of Montfort and secured the release of Duke John VI in the succession wars for the duchy of Brittany. He was awarded land grants. In 1425, he was brought in the court of Charles VII at Saumur. At the court, he studied Dauphin to master court mannerisms. In 1427, he fought the English on behalf of the Duchess of Anjou. In the same year, he seized ‘Chateau of Lude’ and took captain Blackburn as a prisoner. He was the commander of the Royal Army from 1427 to 1435. He established himself as a brave heart of war front during the Hundred Years’ War.

In 1429, Gilles de Rais was selected as one of the four lords who was honoured to go to Abbey of Saint Remy to bring the Holy Ampulla to Notre Dame de Reims. In the same year, he joined Joan arc in the battle against the English and their allies from Burgundy. He was counted as among the wealthiest men in Europe. He led an extravagant and lavish life. During 1434 to 1435 he started constructing a Chapel of the Holy Innocents. He also produced his theatrical ‘Le Mystere du Siege d’Orleans.’ In 1440, he abducted a clergyman following friction as the Church of Saint Etienne de Mer Morte. While investigations on the abduction were taking place, his heinous crimes against children were also uncovered.

Gilles de Rais was accused of the murder of hundreds of children and arrested with his two body servants, Poitou and Henriet. In his trial, he confessed of assaulting children since 1432 and maundering them at Champtoce sur Loire and Machecoul. He also stated that he sodomised them before taking away their lives. Parents of the children testified against him, and he was sentenced to death by hanging. He was hanged at Nantes on October 26, 1440. He was buried in Nantes at the church of the monastery of Notre Dame des Carmes.

In 1420, Gilles de Rais married Catherine de Thouars who was a wealthy heiress of La Vendee and Poitou with whom he had a daughter Marie. In history, he is remembered as a bad person for what he did to children.