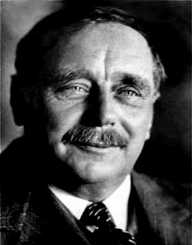 Herbert George Wells was born on September 21, 1866, in Bromley, Kent, England. He was an English science-fiction writer best known for his works ‘The Outline of History’ and ‘The country of the Blind.’ He wrote many books in various genres including social commentary, satire, biography, and autobiography. He is celebrated for his science-fiction novels and was named ‘father of science fiction’ together with Hugo Gernsback and Jules Verne.

Hebert George Wells was born as the fourth child to Joseph Wells and Sarah Neal. He was born on September 21, 1866, in Bromley, Kent, England. When he was seven years old, he suffered an injury of a broken leg from an accident in 1874 which left him bedridden for months. During this period he spent most of his time reading the books from the library which his father brought him.

He developed a deep passion for the books he read which in turn aroused a desire in him to begin writing. He started his education at Thomas Morley's Commercial Academy and studied there until 1880. The family suffered financial crisis after his father’s career as a cricketer ended due to an injury and the shop he owned became bankrupt.

This new condition forced H. G. Wells, and his brother to work as drapers at the Southsea Drapery Emporium, Hyde's. He never liked working as a draper and later had to quit pursuing a job as a teacher. He regained financial stability which helped him go back to school. He received a scholarship to the Normal School of Science where he studied several subjects including physics, chemistry, astronomy, and biology.

He loved reading and was devoted to achieving his dream as a writer. When he was in college, he wrote a short story titled ‘The Chronic Argonauts’ which began an inspiration in his future works.

In 1888, H. G. Wells secured a home in Basford in an environment full of The Potteries which became his inspiration to write a short excerpt known as ‘The Cone.’ In 1895, he published the novel ‘The Time Machine’ a story about an English scientist who made a time travel machine. He continued writing delving in different subjects from social to scientific and from conflict to evolution. His earlier novels had focused on science fiction including ‘The Island of Doctor Moreau’ (1896), ‘The Invisible Man’ (1897) and ‘The War of the Worlds’ (1898).

Apart from fiction, he also published a number of articles, essays, and nonfictional books. He also worked as a reviewer for the Saturday Review for a number of years. In 1901, he published ‘Anticipations’ a nonfictional book highlighted the rise of big cities, impact of economic globalization and future military conflicts. He also wrote about social class and economic constraints in books like ‘Kipps’ in 1905.

H. G. Wells married Isabel Mary Wells in 1891 who was his cousin. The couple later separated in 1894 at a time when Wells was romantically involved with one of his students Amy Catherine Robbins. He married Amy in 1895 at St Pancras register office, and the couple had two sons named George Philip and Frank Richard.

He also had affairs with other women including Margaret Sanger, Odette Keun, Moura Budberg and Elizabeth von Arnim. He had a child with Amber Reeves in 1909 named Anna-Jane and a son Anthony West by Rebecca West, in 1914. He died on August 13, 1946, in Regent’s Park, London at the age of seventy nine.