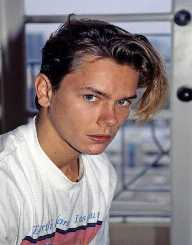 River Phoenix garnered enormous praise for his role in films such as ‘Explorers’ in 1985, ‘Stand by Me’ in 1986, and ‘Running on Empty’ in 1988. His outstanding performances earned him an Academy Award nomination for the Best Supporting Actor and won a Volpi Cup for Best Actor along with honor as the Best Actor at the Venice Film Festival.

River Phoenix is the first child of Arlyn Dunetz and John Lee Bottom, born on August 23, 1970, in Madras, Oregon. His siblings include a brother Joaquin, and three sisters namely Rain, summer and Liberty Phoenix.

He grew up in Micanopy, Florida where they lived in poverty. To help financially, he played guitar and sung alongside his sister Rain on the street although he never attended formal school. In 1973, the family joined a Christian religious movement called 'Children of God' as missionaries. Later in 1970’s his family moved to Florida and changed their name to Phoenix which signified a new start.

A Top Kids agent Iris Burton spotted Phoenix and his sister Rain singing for spare change in Westwood, Los Angeles. She was impressed with their performance and chose to represent them. Phoenix started his acting career by doing commercials for companies such as Mitsubishi, Saks Fifth Avenue, and Ocean Spray.

Later his other siblings signed in for Paramount Pictures. In 1980, he made his first TV appearance in a show called, ‘Fantasy’ and in 1982, he starred with his youngest brother Guthrie McFadden, in ‘Seven Brides for Seven Brothers.'

In 1983, River Phoenix played as Jeffie Crawford in a television movie titled, ‘Celebrity’ and starred as a boy with dyslexia in an ABC after-school special titled, ‘Backwards: The Riddle of Dyslexia.' He also starred alongside his brother in short-lived TV Series, ‘It’s Your Movie’ and as Robert Kennedy Jr in ‘Robert Kennedy and His Times.'

His role in Dyslexia received critical acclaim resulting in his position in a made for TV movie, ‘Surviving: A Family in Crisis’ which he played the lead role alongside Molly Ringwood and Heather O’ Rourke. In October 984, he performed as a geeky boy scientist in a science fiction film, ‘Explorers’ released in 1985. A year later, he co-starred alongside Tuesday Weld and Geraldine Fitzgerald in a CBS television movie, ‘Circle of Violence: A Family Drama’ concerning a domestic elder abuse.

In 1986, River Phoenix received a significant role in, ‘Stand By Me’ and ‘The Mosquito Coast’ as Harrison Ford’s character. Additionally, he recorded a song titled, ‘Heart to Get’ used in the film, ‘A Night in the Life of Jimmy Reardon.’

Although this movie received poor reception, he played the lead role in a teen comedy-drama titled, ‘A Night in Life of Jimmy Reardon’ in 1988. The same year, he starred in ‘Little Nikita’ and ‘running on Empty.’

River Phoenix played a young Indiana Jones in ‘Indiana Jones and the Last Crusade’ in 1989 and photographed for Vogue magazine during the campaign for Gap in 1990. In 1991, he starred alongside Lili Taylor in an acclaimed film titled, ‘Dogfight’ and played a gay hustler in, ‘My Own Private Idaho’ and starred with his brother Joaquin stared in ‘I Love You to Death.’

A year later, River played a conspiracy thriller titled, ‘Sneakers’ and began a production of ‘Silent Tongue’ released in 1994. In 1993, he made a cameo appearance in ‘Even Cowgirls get the Blues’ and starred in a country music-themed film, ‘The Thing Called Love.' Phoenix collaborated with John Frusciante in a song ‘Well I’ve Been’ released in Frusciante’s second album, ‘Smile from Streets You Hold’ in 1997.

River Phoenix bought a family ranch in Micanopy, Florida in 1987. In 1993, he started a relationship with Samantha Mathis while filming ‘The Thing Called Love.’ Notably, he invested in the original House of Blues, which served homeless people on Thanksgiving of 1992. Additionally, he is a dedicated animal rights activist who was a lifelong Vegan.

As an environmental activist, he wrote an essay about Earth Day, aided many organizations and played with his band for ecological benefits. During the 1992 U.S presidential election, he campaigned for Bill Clinton.

On October 31, 1993, Phoenix suffered a combined drug overdose at the sidewalk of West Hollywood, California which resulted in a cardiac arrest and his death at the age of 23. He was cremated and his ashes scattered in his family ranch at Micanopy, Florida.