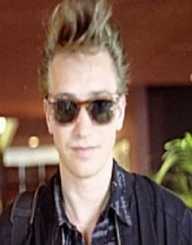 Alan Wilder is an English-born musician and producer who is known for being a member of the popular UK-based band Depeche Mode. After his departure from the band, he continued to produce music and invested himself to one of his works called Recoil.

Alan Wilder married Hepzibah Sessa and fathered two of her children named Stanley Duke and Paris. The pair ended up in divorce later on. He also has another child from his current relationship with Norwegian journalist Britt Rinde Hval; a daughter named Clara Lake.

Alan Wilder was born on June 1, 1959, as Alan Charles Wilder in London, England. He spent his childhood at Acton, located in the West of London and started to learn how to play the piano at his parent's encouragement when he was eight years old. He attended St. Clement Danes Grammar School where he learned how to play the flute and joined the local school band. He befriended percussionist Ted Ing and later formed Cloaca that played on London's local scenes. After school, he would proceed to his part-time job, working at DJM Studios as a studio assistant.

On January 1982, Alan Wilder joined the band Depeche Mode. He found his way in the band after responding to an ad shown at Melody Maker, a music magazine. At the time, Vince Clarke left the group which left the other members to seek another musician to fill his role. Wilder started as a tour keyboardist in the band but became a permanent member until his departure in 1995.

While in Depeche Mode, Wilder's most significant contributions as a member are him being the band's producer, arranger, and songwriter. He is responsible for the songwriting of a number of their hits such as The Landscape is Changing, Two Minute Warning, If You Want, The Great Outdoors, and In Your Memory.

Band Departure and the Recoil

Alan Wilder's involvement with Depeche Mode lasted for a period of 13 years from 1982 to 1995 until he announced his departure in June 1995. He cited that the rising tension amongst band members have prompted his departure, with the other band members struggling with their problems.

The band reunited for a short time on February 17, 2010, during the Teenage Cancer Trust Fund that was held at the Royal Albert Hall in London.

After leaving Depeche Mode, Wilder focused his attention on his side project called Recoil. He started working on Recoil while he was still in the band and produced a two-track experimental EP entitled 1+2 in 1986. Daniel Miller of Mute Records caught wind of the EP and released an album entitled Hydrology. The next album was released after Wilder departed from the band which was released in late 1996 entitled Unsound Methods.