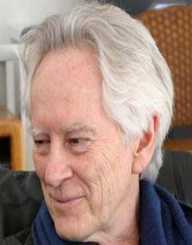 Michael McLure is an American poet, writer, and playwright who became known for his poetry reading at the San Francisco Gallery Reading. He was brought into greater fame due to his controversial play entitled The Beard. Aside from being involved in the field of literature, he also, for a time, served as a college professor at California College of the Arts which was formerly known as California College of Arts and Crafts located in Oakland. In 2014, he was inducted at the San Francisco State University's Hall of Fame.

Born in Marysville, Kansas on October 20, 1932, Michael McLure attended multiple universities. From 1951 to 1953, he attended Wichita State University (then-called University of Wichita), then proceeded to enroll at the University of Arizona where he attended for a year from 1953 to 1954 and later transferred to San Francisco State College where he attained his bachelor's degree in 1955.

He released his first book of poetry entitled Passage in 1956 under Jonathan William's publishing. From there, he published a few books and essays, but he came to attention when he read in San Francisco's Human Be-In Event located at Golden Gate Park. He was dubbed as the Prince of the San Francisco Scene by Barry Miles.


McLure and The Beard

Perhaps his most notable, aside from being controversial, work to date is The Beard. The Beard was a theatrical play that revolves around the relationship and interaction of two characters namely Jean Harlow and Billy the Kid. The play's first run was on December 18, 1965, at San Francisco's Actor's Workshop Theatre. The play was well-received enough where it was showcased for a second time the following year on July 24, 1966, at Bill Graham's Fillmore Auditorium in front of 700 spectators.

However, it was caught in controversy when the two main actors were charged with obscenity and lewd conduct in a public place and spent the night in prison behind bars. The charges were later dropped by the Supreme Court in 1967. Despite the controversy, the play won an Obie Theatre Award for Best Play, Best Director and Best Actress in 1967.

Michael McLure's writing style in regards to poetry leans toward nature awareness which is entirely overlooked in human perspective. All in all, he has published 14 books of poetry and many essay collections, TV documentaries, and musicals. He considers his 1970 publication of The Mad Club as his autobiography.

His writing has won him a number of awards such as the Guggenheim Fellowship, the NEA Award, the Rockefeller Grant, and the Alfred Jarry Award.

Michael McLure was previously married to his wife Joanna where the couple's union gave birth to a daughter. He remarried a second time to sculptor Amy Evans and they currently reside in their Oakland home.