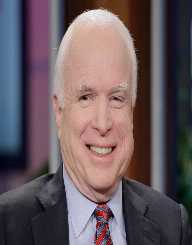 John McCain is known as a military hero as well as a Republican US senator who was defeated by Barack Obama in the 2008 United States Presidential election. He was known to have followed his family tradition by joining U. S. Naval Academy. He took part in the Vietnam War and was almost killed. He was caught in a prisoner and gave him an almost death experience. After his return, he resumed his duty as the Navy Captain.

He returned to join politics after his retirement from Navy. He got elected in House of Representative twice and the U.S. House of Senates four time. John McCain lost against George Bush during the presidential nomination election as well as to Barack Obama during the US presidential election.

John Sidney McCain III was born on the 29th day of August 1936 to the family of John S. McCain Jr and Roberta McCain. His father was a Naval Officer. He was born to at Coco Solo Naval Air Station, Panama Canal Zone. His father, as well as his grandfather, were four-star US Navy admirals. The family is of Scotch-Irish and English lineage. His family later shifted based to Arizona where he went to a preparatory boarding school in 1951. He later went to Episcopal High School in 1954 before attending the United States Naval Academy to continue the family tradition. He finally passed out in 1958.

His military career started during his two and half years training at Pensacola. John McCain became a naval aviator of ground-attack aircraft in 1960. The outbreak of the Vietnam war made the young John McCain volunteer himself to combat. He flew the carrier-based attack planes at low altitude. He bombed the North Vietnamese. On the 29th of July 1967, he escaped a serious injury. A missile on board accidentally shot his plane. At least 137 people were killed. In October 1967, luck seemed to run out of him during his 23rd attack against this North Vietnamese. The North Vietnamese attacked his A-4 Skyhawk.

John McCain was held captive, and he broke his limbs. He was treated and offered a lot of mouth-watery offer which he rejected. He was imprisoned for five and half years in different prison camps. He was later placed in solitary confinement with a lot of torture. John McCain was later released in 1973 as a prisoner of War. He was treated and rehabilitated for him to be able to fly. However, he could not continue his career that much in that field due to his health. He, however, was assigned as the Navy’s liaison to the US Senate in 1977. He later retired as a Captain in 1981.

After his retirement, John McCain started working his father's company, Hensley & Co. There, he handled a lot of public relation related issues. There, he established a lot of political connections. He was elected to the US House of Representatives in 1982 and 1984 respectively. He was also included in the House Foreign Affairs Committee during his years as a representative.

John McCain was later elected to the House of Senate. There, he spent good five terms. As at that time, he served as a member of the Armed Services Committee, Commerce Committee, and Indian Affairs Committee. Surprisingly, he rose to national prominence with his Republican National Convention speech.

John McCain serves as the Chairman of the International Republican Institute in 1993 and till date. He is known to have run against George W. Bush during the nomination election. He also ran against Barack Obama during the 2008 presidential election. However, he lost in both instances. He is always known to have differing thoughts on issues ranging from illegal immigration, global warming, torture as well as the constitutional ban on same-sex marriage. In 2004, he supported the reelection of George Bush.

John McCain married Carol Shepp in 1965. He thus became a stepfather to her two kids from previous marriage. They had their first child in 1966 and divorced in 1980 due to his extramarital affair with Cindy Lou, a daughter of a multimillionaire. He married Cindy a month later after his divorce. He had four children. His sons have followed his family tradition.