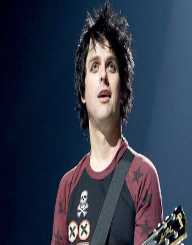 A Guitar God, songwriter and an all-time musician, Billy Armstrong understood the chord theory since inception. His authoritative father was highly known as a promising jazz musician. There and then, Billy learned his ropes in the course of his childhood life. Not only did he learn how to memorize new chord but also improvising new techniques in between. Let’s just say the guitar is his in need companion.

His love for music made his father to gift him a guitar that was previously used by George Cole-music producer. He taught himself how to play drums, harmonica, and mandolin. At five years of age, Billy wrote and managed to record his first song titled Look for Love.

It was also during his childhood days that Billy Armstrong formed a band called Sweet Children along with Mike Dirnt. The band gave birth to another musical group called Green Day’s. The group released a rock opera called American Idiot that topped him to the world of fame. Some of his famous albums include Dookie and Kerplunk.

On 17, February 1971 Billie Joe Armstrong was first seen in the world in Oakland, California, United States. He was born to Ollie Jackson and Andrew Armstrong. His father served as a truck driver as well as a jazz musician. On the other hand, his dearest mother served at a restaurant. At his childhood years, Billy loved to spend time with his six siblings named as Anna, Marx, Hollie, Alan, and David.

Billy Armstrong first went to Hillcrest Elementary School where his music teacher advised him to try music as his career. It was there that he came up with his first song title called Look for Love. At the age of ten, Billy and Mike formed a close relation. The two opted to follow famous bands such as The Replacement.

It was in 1982 that Joe’s father died due to cancer. In the mid of the year, Billy Armstrong released a song titled Wake Me Up When September Ends in memory of his father. Before joining Carquinez Middle School, Billy first went to John Swett High School and later on at Pinole Valley High School. After all the time that he took to study, he opted to follow his dreams as a singer and songwriter.

In 1987 Mike and Joe established a band called Sweet Children. Sean Hughes worked on bass while John Kiffmeyer acted as the drummer. After several controversies, Billy named the band like Green Day.

In 1989 the band released their first song titled 1,000 Hours followed by Slappy album. In 1994 they released an album titled Dookie where they sold over 50 million copies.

For sumptuous success, Billy Armstrong chose to partner with other songwriters and artists. Some of them include the unforgiven band and The Go-Go’s rock band. Aside from his musical journey, Billy has teamed up with other members of The Networks as well as launching his new label called Adeline Records.

The Green Bay band earned five Grammy Awards for Best Rock Album, the 21st Century Breakdown. The American Idiot record, the band, won the American Music Award in 2005. He was also named as the Best Punk Rock Singer by the IMDb. When it comes to his personal life, Joe tied a nuptial knot with Adrienne Nesser in 1994. The couple has two sons called Jakob Danger and Joseph Marciano Armstrong.