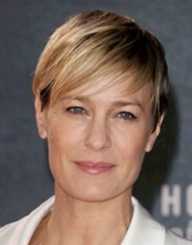 Robin Wright was the pretty actress that played Kelly Capwell on the popular television series, Santa Barbara. She was not just a very beautiful face in Hollywood but a bright young girl with a glowing and blossom confidence. She is very famous and self-confident as she is always ready to apply all that she takes in her modeling business. Robin Wright started her professional career at the age of 14 as a model traveling around the world. As a young girl, she wanted to make a great name for herself in the show business.

Robin Wright, however, returned to school to graduate and earn a degree. Despite the fact that he has no formal training in acting or experience, she landed a role in Santa Barbara and became more recognized by the audience. She gradually became very successful among the Hollywoodaudience and established herself as a star.

Robin Wright was born to Gayle Gaston and Fred Wright. Her mother worked in the Mary Kay cosmetic sales force as a national director while her dad was a pharmaceutical executive. She was indeed from a successful and accomplished family. Robin Wright was raised in California and schooled at La Jolla High School and Taft High School respectively. Being a very pretty girl with a lot of confidence, she decided to venture into modeling at the age of 14. She toured the world as a model loving the experience of traveling around the world.

Her potential is a beautiful and talented as well as confident girl prompted her modeling agent to encourage her to audition for a role in Santa Barbara, a television series. Robin Wright got auditioned and bagged the role of Kelly Capwell in the Soap Opera, Santa Barbara and played the role between 1984 and 1988. It was the role which transited her from being a model to an actress. Her portrayal of Kellly drew the attention of many people including Rob Reiner who told the girl to audition for his new film, The Princess Bride. She earned the role and played a pretty damsel in distress. He later played a role in Forrest Gump in 1994. This movie was a success and drew many people’s attention to her. She starred in a lot of movies later and even went ahead in starring with a veteran actor, Morgan Freeman in Moll Flanders in 1996.

Sooner, in 1997, he acted opposite Sean Penn and John Travolta in which Robin Wright played a drug addict and alcoholic lady that is married to a mentally disturbed man. She later went on toplay a role in Unbreakable, a superhero film in 2000. At that period, she had become very successful in the field as well as one of the most notable actresses. He appeared in several movies including a documentary Searching for Debra Winger. She later appeared in Empire Falls which happens to be a two-part mini-series in 2005. She later won several awards with the series and became a part of the ensemble cast of New York; I love You. She later played in numerous movies later including The Conspirator and House of Cards.

Robin Wright was successful as an actress as well as a model. She was able to stand her ground and become one of the most successful actresses in her career. She is known to have played so many roles in her acting career and earned a name as one of the most bankable actresses. She has played the role of an ambitious politician as well as a loyal wife that is always ready to manipulate her ways to achieve political success.

Her performance in House of Cards which was based on a novel written by Michael Dobbs. This movie was considered her best work to date. Robin Wright received numerous awards and nominations for the role she played in this movie.

In 1986, Robin Wright married Dane Witherspoon but the marriage was short-lived, and they broke up within two years. She later entered another relationship with actor Sean Penn with whom she had two children. They got married in 1996 but divorced after 14 years of marriage.