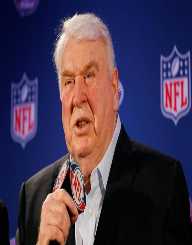 John Madden was born on April 10th, in 1936. Over the years, he has gained huge fame for coaching the NFL. While serving as the Oakland Raiders head coach, he was bestowed with a Super Bowl. Upon retiring from the coaching field, he took the role of NFL telecasts’ color commentator. Due to his immense success in his coaching career, Madden was officially inducted into the Hall of Fame in 2006.

John Madden was born on April 10th, 1936. His place of birth was in Austin, Minnesota. He was the son of Mary Margaret and Earl Russell Madden. His father worked as an auto mechanic. For his middle school education, Madden enrolled with Our Lady of Perpetual Help. Years later, he successfully graduated from the institution in 1954.

John Madden began exploring his sports talent while he was still taking his high school education. After this, he went on to play in some colleges including Grays Harbor College, the College of San Mateo, Oregon, and later to California Polytechnic State University. While playing for the latter institution, he played defensive and offensive positions for the Mustangs. After that, in 1959, he earned his Bachelor of Science in Education. Two years later he obtained his master's degree in education.

During the 1958 games, Madden was part of those listed during the first NFL draft. However, his rising career in the pitch was halted by a knee injury. It was due to this injury that influenced his decision to go back to California Polytechnic State University and complete his higher education.

In 1960, Madden switched careers and became part of the coaching staff for Allan Hancock College team. Two years down the line, Madden earned his promotion to serve as the team’s head coach. Moments later, he shifted to San Diego State University. The team's impressive record at the time of his coaching earned him high acclaim.

A few years later, John Madden was back in the professional football arena this time as the coach for the Oakland Raiders. With the experience that he had for the game, he helped his team get to Super Bowl II during that season. Following the resignation of the head coach named John Rauch, Madden gladly took up the position to serve as the head coach for the team. He was appointed the head coach while he was only 32 years old.

After years of coaching in the NFL, John Madden soon retired in 1979. This was followed by his entry into the CBS broadcasting team. He spent close to three decades in this career, and as a result, he became a nationwide celebrity. This was because he rose to become a celebrated analyst in the game he loved most.

Madden also earned a name for himself after writing some bestselling books such as Hey Wait a Minute – 1984 and All-Madden – 1996. He relied on his immense popularity to land himself commercial pitches for some organizations such as Ace Hardware, Miller Beer, and several others. Besides, Madden also brought profound success to his side after being chosen to be the face of Madden NFL. This was a highly successful video game at the time.