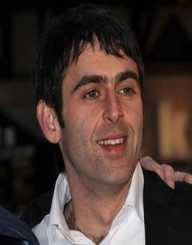 English professional snooker player Ronnie O’Sullivan was born Ronald Antonio O’Sullivan on the 5 December 1975. In Wordsley, West Midlands, England. His parents, Maria Catalano and John O’Sullivan owned a chain of sex shops, and he was raised in Chigwell, Essex.

Ronnie O’Sullivan showed his skill at the game of snooker at a young age. He began playing when he was  7 and at the age of 13 became the British Under-16 Champion. At age 15, he became the youngest player to compile a maximum break in the competition. He won the IBSF World Under 21 Snooker Championship (1991) and the Junior Pot Black (1991).

Ronnie O’Sullivan turned professional in 1992 and won the 1993 UK Championship the following year when he beat Stephen Hendry. The win made him the youngest winner to achieve a ranking title.

In 2018, he was beaten in the second round of the World Championship by Ali Carter, losing 13-9. In September 2018, Ronnie O’Sullivan successfully defended his Shanghai Masters title by defeating Barry Hawkins 11-9.

During the early 1990s, Ronnie O’Sullivan had a difficult time when his father was imprisoned for killing a man in a bar fight, and his mother was detained for 12 months for tax evasion. His father was released after doing 18 years in prison. O’Sullivan has written about his issues with depression and drugs.

His firstborn child is Taylor-Ann Magnus (b.1996) from his relationship with Sally Magnus. He then entered into a relationship with Jo Langley, and they had two children together: Lily (2006) and Ronnie (2007). He separated from Langley in 2007 and became engaged to actress Laila Rouass in 2013.

Ronnie O’Sullivan is a fan of football and supports Arsenal. He is also interested in motor racing and in 2004, was in an episode of Top Gear. He is a keen runner and has been ranked in the top 1500 in the UK (2008).