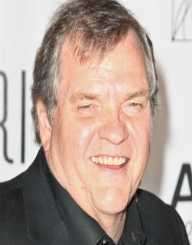 American singer, songwriter, record producer and actor Meat Loaf was born on the 27 September 1947 in Dallas, Texas to Orvis and Wilma Aday. He changed his first name from Marvin to Michael in 1984. His childhood was difficult, and occasionally he used to live with his grandmother due to his father’s drinking binges.

After graduating from Thomas Jefferson High School, Meat Loaf was a student at the University of North Texas.

Meat Loaf left Texas in 1967 and relocated to Los Angeles where he did various jobs while starting a band, Meat Loaf Soul. The band did not last, and he turned to acting where he found a role in a stage production of the musical Hair. His role in Hair led part in The Rocky Horror Picture Show (1975) which as an international success.

Meat Loaf had continued working on his music, and his debut album Bat Out of Hall (1977) was a success which produced the hit Two Out of Three Ain’t Bad. He formed a band, The Neverland Express, which included Jon Steinman and they toured promoting the album. A guest appearance on Saturday Night Life in 1978 helped promote the album.
He broke walking off the stage in Ottawa, Canada and had to finish the rest of the tour on stage in a wheelchair.

Jim Steinman, the writer Meat Loaf worked with on Bat Out of Hell felt that he had not been given sufficient recognition on the album and this led to tension between them. Along with other lawsuits, Steinman filed a lawsuit, and in 1983, Meatloaf was declared bankrupt. In 2013 Meat Loaf announced on The Jonathan Ross Show that he had been in communication with Steinman and would be contributing songs to his new album.

During the 1980s Meat Loaf had substance abuse problems which coupled with financial stress led to a nervous breakdown.

His autobiography To Hell And Back was published in 2000.

His first wife was Leslie Aday whom he married in 1979 and divorced in 2001. He has been married to Deborah Gillespie since 2007.