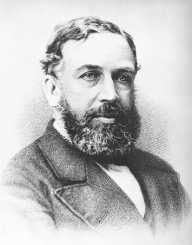 John Venn was born on 4th August 1834 to Reverand Henry Venn and Martha Sykes. His father, Henry, was a Reverand for the Anglican church. Venn’s mother died when he was only three years old. Venn had a harsh upbringing due to the family history of the church. Venn came from a long line of church ministers.

In 1846, Venn started his education at Sir Roger Cholmeley’s School with his brother Henry. The school today is known as Highgate School. Before beginning school, Venn was taught at home by tutors.

After finishing at Sir Roger Cholmeley’s School, John went on to Islington Proprietary School. And from there, in 1953, he began at Gonville and Caius College, which was part of the University of Cambridge.

John Venn was awarded his Degree in Mathematics in 1857. He also became a Fellow at the University. He was elected as Chairman of the College in 1903, and he held this position until his death in 1923.

In 1859, John Venn became an ordained minister to follow in the family footsteps of becoming a minister of the church. He stayed in the ministry for three years, after which time he became a lecturer at Cambridge. He decided the ministry was not for him, and that his thoughts on philosophy were not aligned with the church.

When Venn lectured at Cambridge, he taught science, morality, logic and probability theory. He also studied logic and went on write four books on the subject.

In 1881, John Venn introduced what would become known as “Venn Diagrams” to the world. They looked at logic in a whole new manner, from a pictorial point of view. Venn’s work was a real legacy and has been used as the yardstick to understanding logic since its inception, right through until today.

Venn wrote four published volumes on mathematics. They are as follows:

The Logic of Chance was a ground-breaking book for its time, talking about the theory of probability. It was Symbolic Logic though, that introduced the symbolism into logic.

There were also several publications of a more personal nature.

John Venn was awarded a Fellow of the Royal Society in 1883.  This award is given by the Royal Society of London to individuals that it deems have made significant improvements in the areas of mathematics and science.

In 1868, John Venn married Susanna Edmonstone. They had a son and named him John Archibald Venn. The younger Venn grew up to be famous in his right, as a well-regarded economist.