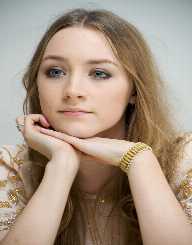 Saoirse Ronan is an American born Irish actress who is best known for her roles in Atonement and Brooklyn.

Saoirse Ronan was born on 12 April 1994 in The Bronx, New York. Her parents, Monica née Brennan and Paul Ronan are both from Dublin, Ireland. When Ronan was three, she moved to Ireland with her parents, at first to County Carlow in the south-east of the country before settling in Howth, which is south of Dublin city. Ronan’s father is also an actor and had been a cast member of the Irish television series, Ballykissangel, which also featured Colin Farrell. Ronan’s father also appeared in some films including, The Devil’s Own, The Boxer and Ordinary Decent Criminals. Ronan’s mother had also been interested in drama as a child.

Ronan began working as a professional actor on Irish television. She acted in shows distributed by the state broadcasting company RádioTeilifísÉireann. Her first appearance was in the medical drama, The Clinic. The show revolves around a small health clinic in an affluent part of Dublin. It also featured Aidan Turner, Chris O’Dowd, and Amy Huberman, during its seven-season run. The same year Ronan appeared in Proof, a miniseries that was co-produced by Irish and Danish TV stations. It was a rating success and was the most watched drama in Ireland that year. Ronan got her major film breakthrough in 2007 when she was cast alongside James McAvoy and Keira Knightly in the film, Atonement.

Ronan plays a thirteen-year-old BrionyTallis, who is an aspiring writer. When her cousin is raped, she blames her elder sister’s boyfriend who is jailed for the crime. This creates the conflict between the film and the atonement that Ronan’s character seeks in the film. The film grossed over one hundred and twenty-nine million dollars globally and was well received by critics.  It received seven Academy Award nominations and propelled Ronan to stardom. The same year Ronan played Michelle Pfeiffer’s character’s daughter in I Could Never Be Your Woman. The film also featured Paul Rudd and David Mitchell. It was a flop both critically and commercially.

In 2008, Ronan featured alongside Catherine Zeta-Jones in Death Defying Acts. Jones plays an impoverished psychic, and Ronan plays her daughter. The pair attempt to win a reward for finding out what Harry Houdini’s mother said to him on her deathbed. The film was only given a limited release in the major film markets and therefore had very modest box office takings. 2008 also saw Ronan star as the protagonist Lina Mayfleet in the science fiction film, City of Ember. The film was a major box office flop failing to make even half of its fifty-five million dollar budget back. Ronan turned down a part in Ridley Scott’s Robin Hood in 2009 to appear in Peter Jackson’s The Lovely Bones. In the film, she plays a murder victim who watches her family’s grief from a kind of limbo. Ronan’s performance rose above the negative reviews the film received and was heavily praised for her role.

2010 saw Ronan star alongside Colin Farrell and Ed Harris in the war drama, Way Back. The film focuses on a group of Polish prisoners attempting to escape the Siberian gulags by trekking to India. The film received much critical praise. Ronan was invited to become a member of the Academy of Motion Pictures and Sciences in 2010. The following year Ronan appeared in the title role of the film, Hanna. Ronan plays a teenager raised in the Arctic Circle to become a killing machine. Ronan’s character is trained to assassinate Cate Blanchet’s character by Eric Bana’s character. The film received mostly good reviews and was a modest box office success. Ronan’s next film was the science fiction thriller, Host, was heavily criticised in reviews. She enjoyed slightly more success in Byzantium, which was also released in 2013. Irish Academy Award-winning director Neil Jordan directed Byzantium. Although Byzantium received excellent reviews, overall it was a commercial disaster.

In 2015, Ronan starred in the critically acclaimed Brooklyn. The film sees Ronan play a young Irish emigrant to America and her struggles to adapt to her new home and to let go of her homeland. The film was nominated for three Academy Awards. Ronan made her Broadway debut in 2016 as she appeared in 125 showings of Arthur Miller’s play, The Crucible. Ronan is currently slated to star as Mary Stuart in a film telling the life story of Mary Queen of Scots.

Saoirse Ronan keeps her romantic life strictly private, and little is known of her dating history. She moved to New York in 2016.

Ronan is an ambassador for the Irish Society for the Prevention of Cruelty to Children.