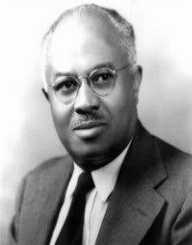 E. Franklin Frazier was an American sociologist and author born in 1894. He is best remembered for his work on the social structure of African Americans. It provided great insights that helped solve many of the challenges that the black community went through.

Among such work includes The Negro Family in the United States. It became the first book ever to be written by a black person. Frazier was a sociology graduate of Clark University where he was attained his A.M in 1920. He wrote many other books throughout his life before he died in 1962.

E. Franklin Frazier alias Edward Franklin Frazier was born on September 24, 1894, in Maryland, Baltimore, United States. He was among the five children of Mary Frazier and James H. Frazier. His father earned a living as a bank messenger.

For his early education, Frazier attended public schools in Baltimore. He later joined colored high Training School, still, located in Baltimore and he graduated in 1912. Thereafter, the school awarded him a scholarship to join Howard University. By 1916 he was done with his studies and graduated with honors.

E. Franklin Frazier was quite an aggressive scholar. Among the subjects, he pursued include Greek, Latin, mathematics, and German. During his free time, he took part in extracurricular activities like drama. In 1916 he has elected as the class president a position he held the following year as well.

It was later in 1920 that Frazier attained his master’s degree from Clark University in Worcester, Massachusetts. For his thesis. Frazier chose the topic New Currents of Thought Among the Colored People of America. It is at Clark that Frazier started learning sociology. By 1931 he received his Ph.D. in sociology from the University of Chicago.

E. Franklin Frazier began his career in Morehouse College in Atlanta where he taught sociology. This was a historically black institution. It is then that the Atlanta University School of Social Work came into being.

Also, from 1929 till 1934, he began teaching in another historically black institution, Fisk University in Nashville. During this time, he was also taking his fellowship in sociology at the University of Chicago. Onwards, from 1934 till his death, he taught at Howard University.

Some of his major works include:

Frazier’s book The Negro Family in the United States received the Anisfield-Wolf Book Award in 1940. This was for its significance when it came to race matters.

At some point in Frazier’s life, he had to move away from Atlanta along with his family. This was following threats against some of the works that he wrote about the whites.