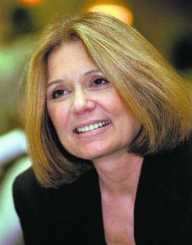 American feminist, writer, and political activist Gloria Steinem were born on the 25 March 1934 to Leo Steinem and Ruth Nuneviller in Toledo, Ohio.

Her paternal grandmother, Pauline Steinem, was a suffragette who had chaired the National Woman Suffrage Association’s Education Committee in 1908. Her father was a traveling antique dealer, and the family moved about, living in a trailer. After her mother had a nervous breakdown, she spent time in mental institutions. When Steinem was 10, her parents divorced.

Gloria Steinem graduated from  Western High School in Washington D.C. and then enrolled at Smith College, obtaining a degree in 1956.

After graduation, Gloria Steinem spent two years in India, on a Chester Bowles Fellowship where she wrote for some Indian publications. During her time in India (1957-1959) she was exposed to Gandhian activism.

Returning to the United States, she worked for the Independent Research Service. In 1960, Warren Publishing employed her to work on their new publication Help! Magazine. As a freelancer, she also wrote for various publications including Esquire.

Other work included a short stint with Playboy Bunny (1963) where she wrote an article A Bunny’s Tale about employees working conditions, an interview with Beatle John Lennon for Cosmopolitan (1964) and a weekly column for NBC’s That Was The Week That Was (1965).

In 1968, Gloria Steinem helped found New York magazine, where she wrote articles and also was a political columnist. She also continued to freelance, and her work was published nationally as well as internationally.

Gloria Steinem was one of the co-founders of Ms. magazine in 1972. She was also the editor of the magazine from 1972-1987, after which she served as a consulting editor.

She co-produced as well as narrated the HBO television documentary Multiple Personalities (1993) which focused on child abuse. She also co-produced the television movie Better Off Dead (1993) for Lifetime. In 2016, she began hosting the Vice series Woman, which she also hosts.

Other organizations she co-founded including Choice (USA), Ms. Foundation for Women and Take Our Daughters to Work Day. Steinem was active in the Beyond Racism Initiative. She consults with the Sophia Smith Collection which documents the origins of the U.S. women’s movement. Internationally, she helped found Donar Direct Action, Direct Impact Africa and Equality Now. She is also involved with the Center for Organizers, a tribute to Wilma Mankiller of the Cherokee Nation.

In 1995, Parenting Magazine presented Steinem with a Lifetime Achievement Award. Biography magazine has listed her as one of the 25 most influential women in America. In 1993, Steinem was inducted into the National Women’s Hall of Fame. President Obama presented her with the Presidential Medal of Freedom (2013).

Gloria Steinem married South African born David Bale in 2000, and they remained married until his death in 2003. The actor Christian Bale is her step-son. Steinmen’s life was covered in the HBO documentary, Gloria: In Her Own Words and Carolyn wrote a biography, The Education of a Woman.