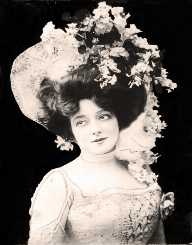 Helene Anna Held was born on March 19, 1872, in Warsaw, Congress Poland, Russian Empire. Her father was a German-Jewish glove maker, and her mother was French. In 1881, the family had to flee to Paris, France, due to anti-Semitic riots in Poland. There her father worked as a janitor, but her mother operated a kosher restaurant.

To help her family, Held began working in the garment industry and also sang in Jewish theatres in Paris. After her father’s death, she and her mother moved to London. There Held also sang in theatres and got small roles in theatre.

Anna Held amazed the audiences with her personality, and soon after her first appearances on the stage, her career began to gain momentum. She was known to sing risqué songs, flirt and show off her legs while performing. Held got married to Uruguayan playboy, Maximo Carrera in 1984and had a daughter with him in 1895.

After her daughter was born, Held went to tour Europe. In London, she met Florenz Ziegfeld, who asked her to come with him to New York. Held agreed, and soon after, Ziegfeld began marketing her name to the American press. When they arrived in New York, she was already the talk of the city. Her first performance was in a revival of A Parlor Match, which was dismissed by critics but loved by the public.

After several smaller appearances, Anna Held finally gained success on Broadway. Ziegfeld had a talent for publicity stunts, which ensured her name to be and remain well known. Ziegfeld later established the famous Ziegfeld Follies which marked the most lucrative phase of Held’s career. In 1908, she got pregnant with Ziegfeld’s child and could not perform. She had an abortion, and it was later claimed that Ziegfeld forced her to have one to avoid the pregnancy interfering with her shows.

In 1909, Ziegfeld began an affair with Lillian Lorraine. After their relationship ended, she hoped that Ziegfeld would return to her, but instead he began a relationship with another actress, Billie Burke and married her in 1914. During World War I years, Held toured France with a vaudeville group and raised money for the war effort. For her contributions, she was considered to be a war hero.

Held was constantly touring throughout 1917, and her health began to suffer. In 1918, she had to close one of her shows due to illness. Held’s health continued to decline, and she died on August 12, 1918, from multiple myeloma. She was 46 years old at the time.