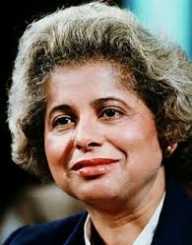 Patricia Roberts Harris was born on May 31st, in 1924. She earned high acclaim after serving in President Jimmy Carter’s administration as the Secretary Of Health And Human Services. Before this, she had served as the Secretary of Housing and Urban Development. Patricia earned credits for she was recognized as the first woman from the black race to serve in the U.S. Cabinet.

Patricia Roberts Harris was born on May 31st, in 1924. Her birthplace was in Mattoon, Illinois. Bert Fitzgerald, her father, worked as a car waiter. On the other hand, Hildren Brodie, her mother was a homemaker. Patricia had a younger brother called Malcolm. At the age of six, her father abandoned them, and as a result, she had to be taken care of by both her grandmother and her mother.

Patricia Roberts Harris attended Howard University. She completed her studies here in 1945. Next, she went to the University of Chicago where she pursued her postgraduate studies in industrial relations. She also went to the Amercian University for a short period.

After that, she earned herself a job as the American Council on Human Rights as the Assistant Director. It is while working here that she crossed paths with William Beasley Harris, her future husband. The pair tied the knot in 1955. Due to her husband’s influence, Patricia decided to pursue a law degree. She went to the George Washington University Law School and later graduated in 1960.

With time, Patricia Roberts Harris worked for the United States Department of Justice. She became close friends with Robert Kennedy, the then attorney general. In 1963, she co-chaired the National Women’s Committee for Civil Rights.

Similarly, Patricia also offered her services in the Lyndon Johnson’s administration. Initially, she was among those that had been chosen during Johnson’s presidential campaign trail. After winning the elections and becoming the 36th, president of the United States, Johnson chose Patricia to serve as Luxembourg’s ambassador. She held this post for two years beginning in 1965.

In 1969, Patricia became Howard University’s dean. This was a huge post for her as she was the first black American woman to be bestowed with such a role. Nonetheless, she stepped down after just a month.

After taking over as the next president, Jimmy Carter appointed Patricia Roberts Harris to his cabinet. Again, this was a huge achievement for Patricia as she became the first African American to be bestowed with such a responsibility in the government.

Patricia Roberts Harris wedded William Beasley in 1955. The pair had only dated for three months before exchanging their vows. Unfortunately, her husband passed away in late 1984. The following year Patricia also died.

Patricia Roberts Harris breathed last on March 23rd, in 1985. She was 60 years old at the time of her demise. Patricia had breast cancer which contributed to her early death.