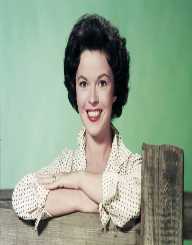 Shirley Temple took the world by storm in the 20th century. She was a little angel who emblazed everyone with her signature dimples. At the age of four, Shirley had already appeared in more than ten movies. From 1935 to 1937 Temple played ‘Curly Top’ and ‘Rebecca of Sunnybrook Farm.' She trained her singing talent at the ‘Bojangles’ movies with the help of prominent dancer Bill. Shirley created beautiful songs like ‘Animal Crackers’ and On the Good Ship Lollipop.' She later came to show her other side of interest politics. Till now Shirley is still known as one of the best diplomats that changed the world and beyond.

On 23, April 1928 Shirley Temple was born in Santa Monica, California to a bank teller. As soon as she learns to walk, Temple began to take little bop step. Her mother, Gertrude saw a developing talent, and that’s where she opted to take her Meglin's dancing school. With a never give up soul Shirley, Gertrude helped her daughter to secure a show business career by taking her to different agents. Her persistence came to pay off when little Shirley landed a contract. By chance her mother was a perfect hairdresser; that’s where Shirley’s ringlets hair came from. In 1932 Educational Pictures signed Shirley for a long-term contract.

Her very first assignment made her play a series of one-reelers titled ‘Baby Burlesks’ and others like ‘Frolics of Youth’ followed. Shirley Temple also modeled for cereals and breakfast and other commercials in her childhood years. In 1932 she appeared in a small role called ‘Red-Haired Alibi. Unfortunately, Educational Picture experienced financial constraints to the point of closing down. In 1934 she signed a deal with Fox Films and released ‘Stand Up and Cheer’ movie. After a few months, Temple appeared in several movies that everyone loved; ‘Bright Eyes’ was specifically played to showcase her real talent.

In 1935, Shirley continued to grind and topped up the ladder by taking the role of Elizabeth in ‘Curly Top.' She portrayed an energetic, candied but naughty character in between. Without a doubt, the movie made her reach to the biggest commercial hit. To the contrary, most of Shirley films depicted the success of good over evil. From 1936 to 1938 Shirley played major films such as ‘Heidi,' ‘Dimples,' and Little Miss Broadway.' At the age of 11, Shirley appeared on ‘The Little Princes’ by Frances Hodgson. The film was a success and that marked her final episode as a child artist.

It was rumored that Temple would later continue with her acting career, but this was cut short. In 1940 Shirley played two movies, and both backfired before reaching the target audience. Another thing is that Shirley’s parents wanted her to centralize her effort on her studies and nothing else. At 12 years of age, Shirley was sent to Westlake School for Girls. After trying several films without success, Temple backed down in 1915.

In the mid of 1950s, Shirley re-appeared at the NBC television show where she used to narrate anthologies titled ‘Shirley Temple Storybook.' She was given a chance to play sixteen episodes before closure. Early 60s Temple showed an intense love for politics. In the process, she was allotted the United States ambassador to Ghana. From 1989 to 1992 Shirley paid her duty as the US Ambassador to Czar.

During the 1960s Shirley became active in politics and was appointed the US ambassador to Ghana from 1974 to 1976. She also presented her service as the US Ambassador to the Czech Republic from 1989 to 1999.

In 1935 Shirley’s efforts were recognized when she received a special Juvenile Academy Award. At her tender age of 17, Temple met John Agar with whom they married later in 1945. The couple had a daughter, but they parted ways after few years. She was then married to Charles Alden Black, an intelligence officer. The couple was blessed with two children. She gave it all in her marriage, including devotion, sacrifice for 54 years when her husband died in 2005. In 1972 Temple was diagnosed with breast cancer and managed to escape the chemo process. She got a chance to air about breast cancer in different airwaves. On 10th February 2014, Shirley died at Woodside, California due to acute pulmonary disease.