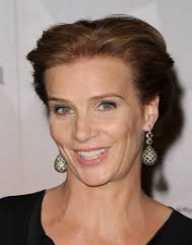 Rachel Griffiths is a TV actress from Australia. She is best known for her role in the HBO series Six Feet Under.

Rachel Anne Griffiths was born on December 18, 1968, in Melbourne, Australia. Her father left the family when she was 11. Her mother was an art teacher and later an art consultant. She has one brother.

Rachel Griffiths attended Star of the Sea Catholic's Girls' College. Later she attended Victoria College. She graduated in 1990 with a degree in drama and dance.

Rachel Griffith's first love is the theater, so she joined a community theater group, Wooly Jumpers, after college. She found work in TV movies and even the 1993 Australian drama series Secrets, but she found great success in film.

Later she was able to perform with the Melbourne Theatre Company in 1994 and continued on and off into 2002. She got her debut role in the award-winning 1994 Australian comedy Muriel's Wedding.

Rachel Griffiths found other roles in 1996 with Jude and Children of the Revolution, as well as My Best Friend's Wedding in 1997. Her role in Hilary and Jackie earned her an Oscar nomination for Best Supporting Actress.

In 2000, she signed on to HBO's series Six Feet Under. The series ran from 2001 to 2005. A year after the series was over, she took on the role as Sarah Walker in Brothers & Sisters with Sally Fields and Calista Flockhart. She was nominated for a Golden Globe award two years in a row.  The series was on the air until 2011.

While Six Feet Under was airing, Griffith was also in supporting roles in the baseball film The Rookie (2002). She was also in Comanche Moon in 2008 during her time with Brothers & Sisters.

After Brothers & Sisters, Rachel Griffiths chose to spend more time with her family. She started directing TV shows such as the teen drama from Australia Nowhere Boys. She also wrote and directed her own story titled Tulip.

Rachel Griffiths has been in TV and film in both the United States and Australia. As of 2018, she stars in the Australian crime thriller series Dead Lucky.

Rachel Griffiths promotes the arts. She is a board member of the Sydney Contemporary Art Fair. She is also outspoken in favor of same-sex marriage.

Rachel Griffiths was nominated for an Oscar for her role in Hilary and Jackie. She has also been nominated for Primetime Emmy Awards and Golden Globe Awards for her roles in Six Feet Under and Brothers & Sisters.

In 1997, Rachel Griffiths attended the opening of Crown Casino in Melbourne, Australia with no top on. The reason was to make sure that her message got out to the public.