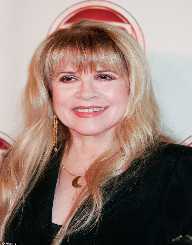 Stevie Nicks was born on May 26th in 1948. She is famed for her unique voice and her songwriting skills. In 1975, she partnered with Fleetwood Mac landing herself in the limelight.

Besides her works with Fleetwood Mac, she has also garnered herself immense fame in her solo career. In 1998, she was inducted into the Roll Hall of Fame.

Stevie Nicks was born Stephanie Lynn Nicks on May 26th, in 1948. Her place of birth was in Phoenix, Arizona.

She was the daughter of Jess Nicks and Barbara Nicks. Her father Jess once served as the president of Greyhound's Armour-Dial, a meat packing industry. On the other hand, her mother was a homemaker.

Nicks honed her singing talent with the help of her grandfather called Aaron Jess Nicks who was a country music singer. She was aged four when she began getting help in singing duets from her grandfather.

While Stevie Nicks was taking her studies at the Menlo-Atherton High School, she crossed paths with Lindsey Buckingham, and the two fell in love.

Sooner or later, Stevie Nicks took over as the lead singer for the Fritz band. Her boyfriend Buckingham played bass whereas Javier Pacheco was on the keyboard, Brian Kane on the lead guitar and Bob Aguirre drummed for them.

Around this period, Pacheco was the one that wrote songs for the band. However, Stevie Nicks' creative compositions gave the group a new country rock flavor which greatly inspired them. The band grew in popularity right from 1968 to 1971.

After playing for some time with the band, they broke it off in 1972. Nevertheless, this did not stop the two lovebirds from taking their music career to different heights. With time, the duo landed on a recording contract with Polydor Records.

Shortly after, they released their first duo album called Buckingham Nicks -1973. Unfortunately, their debut album did not perform well, and this influenced Polydor Records’ decision to drop them.

From this point, things took a different turn as Nicks had to take on odd jobs to offer support to the family.

Subsequently, in 1975, the couple were again together when they partnered with Fleetwood Mac. The same year, they released their debut album titled Fleetwood Mac. This was a massive hit for them as it garnered the two profound fame globally.

One of Nicks’s hit single in the album called “Rhiannon” was ranked among the top 500 greatest songs of all time by Rolling Stone. “Landslide” was also another hit single that performed well in the groundbreaking album.

Unfortunately, with the success that Fleetwood Mac brought to the couple, tension grew and with time the two went separate ways.

In the late 1970s, Stevie Nicks opted to launch her solo career, and in 1981 she released Bella Donna as her first solo album. This was a huge hit as it topped the Billboard charts. Other solo albums followed including Mirage – 1982 and TheWild Heart – 1983.

Stevie Nicks was married once to Kim Anderson in 1983. This occurred after her longtime friend Robin Anderson passed away.