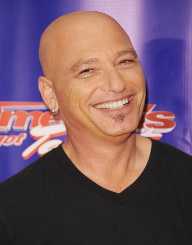 Howie Mandel is a popular Canadian television personality known as the host of the game show Deal or No Deal on NBC. Born on November 29, 1955, he is also a comedian and actor. Howie Mandel is also known as a judge on American’s Got Talent and for creating the cartoon series Bobby’s World.

As an actor, Howie Mandel had his breakthrough with the role as De Wayne Fiscus in the medical drama St. Elsewhere on NBC. He starred alongside Amy Steel in Walk Like a Man in 1987. Howie Mandel is living with an obsessive-compulsive disorder, hence his wearing of latex glove before extending handshakes. He also has an attention deficit hyperactivity disorder (ADHD).

Howie Mandel was born on November 29, 1955, in Willowdale, Toronto, Ontario. He is the son of a real estate agent and lighting manufacturer. Growing up, he was fond of staging pranks on family and friends, which will eventually get him expelled from high school. After school, he started a business as a door-to-door carpet salesman.

Howie Mandel decided to put his humor side to test by starting a career as a stand-up comedian. He started performing at Yuk Yuk’s in Toronto and managed by David Holiff. He grew in popularity at became highly sort of as featured act. On a usual business trip to Los Angeles, he tried out his comics at The Comedy Store, and that was the beginning of greatness for his career. He became a regular at the Store, and that was where a producer for Make Me Laugh discovered his potentials and booked book him to appear on the show.

Howie Mandel made several appearances on the show in 1979. With his great talent and outstanding performance, CBC-TV signed him to appear on a TV special. The following year, he had a lead role in the Canadian movie Gas. He went on the Watusi Tour performing in several cities, and that was followed with the release of the Watusi music video in 1987.

Howie Mandel’s popularity came with several opportunities and roles. In 1982, he was cast asDr Wayne Fiscus in St. Elsewhere opposite Norman Lloyd and Ed Flanders. The series increased his popularity as it ran for six years through 1988. All this time he continued working as a comedian.

He also had other movie roles lending his voice to the character Gizmo in Gremlins, 1984 and its sequel Gremlins 2: The New Batch in 1990. In 1987 he appeared alongside Amy Steel in the comedy film Walk like a Man and followed it with Little Monsters, 1989 as Maurice. In 1995, he starred in the sketch comedy Howie Mandel’s Sunny Skies on Showtime and that same year appeared in the music video of Clint Black’s Summer’s Comin.

In 1990,  Howie Mandel started creating and served as the executive producer for the animated series Bobby’s World on Fox. He also voiced the main character, Bobby, and his father. The series ran through 1998 with eight seasons. He hosted his syndicated talk show The Howie Mandel Show in 1998, canceled after one season.

In 2007, he was made the spokesperson for buy.com, an internet retailer. He was the host of the NASCAR Sprint Cup Award Ceremony on November 30, 2012. He also premiered the special game show Take It All on December 10, 2012. He performs at the MGM Grand Hotel-Casino in Las Vegas, Nevada.

NBC hired  Howie Mandel to host its flagship game show Deal or No Deal premiered in 2005. This was after he has rejected the offer on several occasions. On the show, participants have the chance to win $1 million if they select the right suitcase. He hosted five episodes of the Canadian-English version of the show in 2007. The show was aired through 2009.  Howie Mandel is to serve as the host and executive producer of the 2018 revival of the show as announced by CNBC on March 12, 2018.

Howie Mandel replaced David Hasselhoff as one of the judges on NBC reality American got Talent in 2010. This was Hasselhoff resigned to work on a new television series. The show features singers, comedians, dancers, comedians, and other talents. The show made a debut in 2006 and winners are given one million dollars.

Howie Mandel is married to Terry Mandel. The couple has three children namely Jackie and Riley, and Alex. He is suffering from an attention deficit hyperactivity disorder (ADHD), which he disclosed on Live with Regis and Kelly in October 2008. He has published an autobiography Here’s the Deal: Don’t Touch Me which talks about him living with obsessive-compulsive disorder (OCD) and ADHD. He is an alumnus of Beth David B'nai Israel Beth Am's Hebrew School in Toronto.

Howie Mande has been living with obsessive-compulsive disorder since childhood days and has been public about it. The condition comes in different forms including becoming mysophobia. Unless wearing latex gloves, he hardly shakes hands with anyone including contestants on Deal or No Deal. In place of handshakes, he opts for a fist bump and places his hands on their shoulders or offers a hug. According to him, although he been suffering the disorder since childhood, he only sought for treatment in his adulthood.