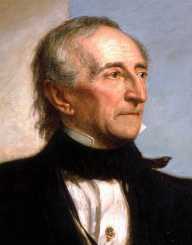 Richard Mentor Johnson was born on October 17, 1780, in present-day Louisville, Kentucky. He was the fifth of eleven children in his family. In 1782 the family moved to Bryan’s Station in Fayette County and later to Scott County. Since there were no schools on the frontier, Johnson began his formal education at 15. He studied at the Transylvania University in Lexington.

In 1799 Richard began studying law as a legal apprentice with George Nicholas and James Brown. In 1802, Johnson was admitted to the Kentucky bar and opened his office at Great Crossing.

In 1804, Richard Mentor Johnson was elected to represent Scott County in the Kentucky House of Representatives, thus starting his political career. He began his work on the Committee on Courts of Justice. In 1806, he was elected as a Democratic-Republican to the United States House of Representatives. He was re-elected for six consecutive terms. From 1815 until 1819, he represented Kentucky’s Third District, mainly focusing on representing the interests of the poor.

When the Congress declared war in 1812, Johnson returned to Kentucky to recruit volunteers. He formed a regiment of 500 men and became the colonel. He returned to Congress in late 1812 and proposed a plan to defeat the mobile, guerilla warfare of the Indians. He presented his plan to President James Madison and was allowed to use his tactics in the summer of 1813. In the Battle of the Thames, Johnson was credited with killing the native American chief Tecumseh but was severely injured.

For his bravery, Richard Mentor Johnson was awarded a sword to honor his daring and distinguished valor. When the British forces attacked Washington D.C. in 1814 and burned the White House, Johnson chaired the committee to investigate what circumstances allowed Washington to be captured. When the war ended, Johnson turned his attention to issues on securing pensions for widows and orphans and funding internal improvements in the West.

After the war, Richard Mentor Johnson sponsored the Compensation Act of 1816, proposing annual salaries, rather than per diem system of compensations. The bill passed and was made a law later that year, but the measures turned out to be unpopular with the voters. Many of the legislators lost their seats as a result, but Johnson remained in the Congress thanks to his popularity.

After declining the Secretary of War post, Johnson became the chair of the Committee on Expenditures where he influenced the Department of War defense policies. In 1818, the expedition to build a military outpost in Bismarck, North Dakota was approved, and the contract was awarded to Johnson's brother.

In 1818, Richard Mentor Johnson announced that he would be retiring from the House and he ran for the post of the senator. Johnson lost in the election; however, when his term in the House ended, he filled the Senate seat after John J. Crittenden had resigned. During his Senate tenure, Johnson, like many other Kentuckians was caught in the Panic of 1819. He took part in the struggle for debt relief and bankruptcy legislation to help his own and his neighbor problems. He wanted to abolish the debt imprisonment practice, and after ten years his goal was accomplished.

Johnson was known in the government for securing contracts for himself and people he was close with. One such endeavor was the establishment of Choctaw Academy, devoted to the European-American education of Indians. The school was built in 1925. During the 19th and 20th Congress, Johnson was the chairman of the Committee on Post Office and Post Roads. He ran for the Senate seat again in 1928 but was not successful.

After his term ended, Richard Mentor Johnson returned to the House and represented Kentucky’s Fifth District from 1829 until 1833, and then the 13th district until 1837. During the 22nd, 23rd and 24th Congress, Johnson chaired the Committee on Military Affairs. His political stands were popular amongst the voters, and he was endorsed for the 1932 presidency. He abandoned his campaign after Andrew Jackson announced he would be seeking re-election for the second term.

After the 1932 election, Richard Mentor Johnson began to campaign for Vice Presidency for the 1836 term. However, he lost the majority vote just one electorate vote short. This meant that the Senate had to elect the Vice President, and he won running against Francis Granger. Johnson served as the 9th Vice President for 1837 until 1841. His term was mostly unremarkable since he had little influence with President Van Buren.

In 1840, it became clear that Johnson was a liability to the Democratic ticket. Van Buren stood for re-election and was reluctant to drop Johnson from the ticket. When the Democratic National Convention refused to nominate Johnson, a compromise ensured and van Buren had to find another candidate for the seat. However, Johnson continued to campaign to retain his office. In the election, he received only 48 electoral votes. He lost his home state of Kentucky.

After finishing his term as the Vice President, Richard Mentor Johnson returned to his farm in Kentucky and oversaw his tavern. He represented Scott County in the Kentucky House from 1841 until 1843. In 1842, he ran for a Senate seat, and in 1844 sought to be nominated for president. In 1850, he returned to elected office in the Kentucky House of Representatives. However, Johnson died of a stroke just two weeks into his term.

Richard Mentor Johnson broke off his marital engagement when he was 16 years old since his mother disapproved of his bride. However, a daughter Celia was born and was raised by the Johnson family.

After his father’s death, Johnson began a relationship with the slave Julia Chinn and treated her as a wife, since they were prohibited from marrying. She died in 1833 during a cholera epidemy. They had two daughters, Adeline and Imogene. He provided the girls with education and financial support. However, they were prohibited from inheriting his estate, since the court ruled they were illegitimate children.