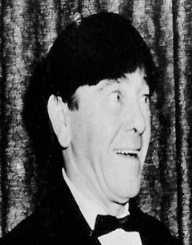 Moe Howard was born on June 19, 1897, in Brooklyn, New York, USA. He had several siblings, including  Jerome and Shemp.

When Moe Howard returned to the screen in 1930, he continued to work in shorts. It was in 1931 that he began appearing in shorts with his new group: The Three Stooges. When the act was first created, Howard was joined by Shemp Howard (his brother), Larry Fine, and Ted Healy. The group was first called Healy and His Stooges. The group first signed on with Columbia Pictures. They were noticed by the film company because of their unique vaudeville style of comedic acting. Many credit one of their videos, Soup to Nuts, as is the video that got the group “noticed” by the company.

Even though this group was best known for their humor, they also tackled some serious issues in a hilarious way. During the 1930’s and 1940’s, the group often picked fun at Nazis and Hitler. The group took on several other issues, like greed, the economic depressions, and illness and injury.

The group produced several videos with Columbia Pictures before Healy left the group. When he left, the group was renamed to The Three Stooges. Jerome Howard, one of Moe’s brothers, then joined the group. For the next twenty-five years, the group made video shorts, totaling almost 200. However, another actor replacement happened in 1956, as Jerome Howard had a heart attack and was replaced by Joe Besser. However, it wasn’t long before Besser was replaced himself by Joe DeRita. With Moe as one of the longest-acting members of The Three Stooges (all in all, there were six Stooges, not just three), he appeared in over 250 videos, including several feature-length films.

The Three Stooges episodes and films stopped being produced after 1970. The reason for this was because many of the Stooges were getting older, and one of them had even died. Around this time, Howard’s health was going into decline in part because of his age and other medical conditions. Still, he continued to appear on talk shows and do interviews.

In 1951, Moe Howard, along with Shemp Howard and Larry Fine, won the Golden Laurel award for Top Comedy for their work in The Three Stooges.

In 1983, Moe Howard posthumously earned his star on the walk of fame.

Moe Howard married Helen Schonberger in 1925. This couple had two children together: Joan and Paul.