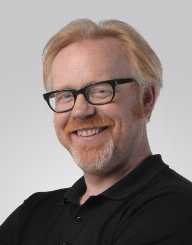 Adam Savage is more than just an industrial designer. He has been a part of the duo busting myths using science and technology.

Adam Savage was born on July 15, 1967, in New York City, New York. His father, Whitney Lee Savage, worked on the children's television show Sesame Street as an animator and filmmaker. Adam was the voice of his father's creation “Heathcliff” from 1978 to 1980.

Adam Savage attended Sleepy Hollow High School. He graduated in 1985. He also attended the Tisch School of the Arts to work on his acting skills.  Savage was there for five years but left when he was 19 to pursue a career in graphic design.

As a child, Adam Savage was working in the entertainment industry with acting assignments in commercials and television programs. He also had a part in a Billy Joel video called “You're Only Human.” As an adult, Adam Savage was creating visual effects for some famous movies. He worked on the visual effects in Robin William's film Flubber.

While Adam Savage was working with special effects teams, he was also an educator at the Academy of Art University in San Francisco. Sometimes his work in the background led to work in front of the camera. Adam Savage had small roles in the 2001 film Ever Since the World Ended and the 2006 film The Darwin Awards. His future co-host Jamie Hyneman was also in that film. The two of them were also in an episode of CSI: Crime Scene Investigations.

Adam Savage and Hyneman are most recognized for their work in the Discovery Channel reality show Mythbusters. The purpose of the show was to prove or disprove myths under different circumstances using scientific methods. They test and conduct experiments, often making their props and inventions. Savage was the energetic half of Hyneman's reserved personality.

After the end of the show Mythbusters, Savage remains active in what he does best. He is an editor and contributor for Tested.com and has recently toured on the Brain Candy LIVE! Tour. Adam Savage often lectures to educate others.

Adam Savage married Julia Ward in 2002. The couple is raising his twin sons from a previous relationship.

The legacy that he created, especially with his reality show Mythbusters, is to ask questions and test theories. He also promotes science and problem-solving.

Adam Savage uses a hearing aid in his left ear. This is due to hearing loss from the congenital condition otosclerosis.

Adam Savage is a supporter of Nation of Makers. The nonprofit organization connects individuals and groups with maker spaces so that they can discuss and create new ideas.

Honorary doctorate from the University of Twente, Netherlands, 2011