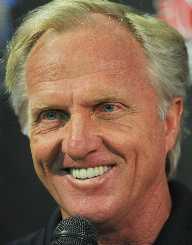 Greg Norman was born on February 10, 1955. He is an Australian Professional golfer. He is also an entrepreneur. He has won over eighty international tournaments. He is currently the chairman and the CEO of the multinational corporation, ‘Great White Shark Enterprises.’

Greg Norman was born on February 10, 1955, in Australia. He was born to Merv Norman who was an electrical engineer and Toini Norman. In 1964, he joined Townsville Grammar School in Queensland, Australia. He later attended Aspley State High School. While in school he played cricket, football, and rugby. His interest in golf developed because his mother was a good golfer. He started playing golf when he was fifteen years old.

In 1975, Greg Norman started his career by working as an assistant professional under Australian golf coach Bill McWilliam at Beverly Park Golf Club in Sydney. His professional career began when he was a trainee under golf coach Charlie Earp in the Royal Queensland Golf Club. In 1976, he won his first game at the West Lakes Classic golf tournament which was held at The Grange Golf Club. In 1977, he made his second win at the Martini International Tournament that was held in Blairgowrie Club in Scotland. In 1979 and 1981, he won the Martini International golf tournaments respectively.

In 1980, Greg Norman won tournaments such as French Open, the Australian Open, The Scandinavian Enterprise Open and the Suntory World Match Play Championship. In 1982, he emerged the money winner in the 1982 European Tour. In 1984, he won in the Kemper Open. He also won the Canadian Open in the same year. In 1986, he won the Kemper Open and the Panasonic Las Vegas Invitational among others. He won the Australian Order of Merit six times, that is, in 1980, 1983, 1984, 1986 and 1988. In 1986, he won tournaments such as Masters Tournament, the United States Open, The Open Championship and the PGA Championship.

In 1989, Greg Norman won two Japan Golf Tour and The Crowns. In 1993, he won the Sumitomo VISA Taiheiyo Masters. In the same year, he won The Open Championship that was held at the Royal St. George’s of Golf Club in Kent, England. In 1997, he received a check amounting to one million dollars after he won the Andersen Consulting World Championship of Golf. In 1989, 1990 and 1994, he won the Vardon Trophy. In 2001, he defeated Tiger Woods in the Skins Game. In 2006, he published his autobiography ‘The Way of the Shark’.

In 2015, Greg Norman remained a co-commentator with Joe Buck for the Fox Sports coverage of the USGA Championships. He is an entrepreneur with a multinational corporation known as Great White Shark Enterprises. His corporation has offices in Florida and Sydney. In 1987, he founded his company Greg Norman Golf Course Design.