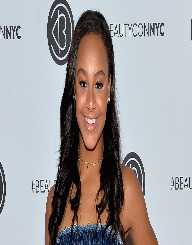 Nia Sioux Frazier is a famous American singer, dancer, and actor. Fraiser began dancing at a very early age, and joined Abby Lee Dance Company and often danced in contemporary and music theaters. Also, she is a talented singer and is known for various videos that went viral. Examples of her most successful videos especially on YouTube are slain and stay in your own life. As an actor, Frazier is mostly known for her contribution as cast in lifetime’s reality show called Dance Moms, whereby Frazier featured for six seasons. Frazier has featured the cover model for many magazines, for example, the `Seventeen’ magazine during its February 2016 production.

Nia Sioux Frazier was born on 20th June 2001 in Pittsburg, Pennsylvania. Her parents are Evan and Holly Frazier. Frazier has two siblings namely William and Evan Jr.Frazier is of black ethnicity and is an American citizen. Nia Sioux Frazier loved dancing since she was very young, at about three years old. She attends Allen Dance Academy for her studies.

Since she was a child, Nia Sioux Frazier was always interested in music and dancing. Frazier is skilled in playing various instruments like the piano and drums. Also, Frazier is a very creative songwriter. Frazier began her journey to fame in 2015 when she released multiple songs and music videos. Due to her productions, Frazier became recognized as a verified artist on Spotify during the same year. In 2016, Frazier was granted a role in famous T.V show `Trip of love.’ Hence, Fraiser moved to New York in 2016 so that she could be able to work on the show. Her mother often supported her and helped her get ready for a stage appearance in July 2016.

While in New York, Nia Sioux Frazier was able to watch about 4-5 shows by Broadway during each year. This ignited her interest in acting, and Frazier wanted to become a Broadway actor. Hence when Frazier was later invited to a role by Broadway, it was the realization of a dream for her. Frazier was able to attain a role due to her talent and performances, despite having various connections that would have quickly helped her climb that ladder. Nia Sioux Frazier later revealed that she was selected by James Walski, who was the choreographer, director, and creator of the series.

Apart from Nia Sioux Frazier undeniable talent, Nia is exceptionally hardworking, a trait that had helped her gain a lot of fans on the show. Most of the time, Frazier performs musical theater dance numbers. Frazier aims to become a successful actor singer and dancer, and always attends acting and voice lessons on a regular basis so that she could be able to achieve that. Although many find acting quite difficult, Frazier claims she simplifies it about dancing. Nia Sioux Frazier argues that just like she expresses her emotions through dancing, she also learns to express such feelings through words while acting.

Even after her role on `Trip of love,’ Nia did not stop working with the dance show `Dance Moms’ and went to become part of its sixth season. Frazier always maintained a reasonably good relationship with her coach Abby Lee Miller and credited him the lot of information she has gained.

Nia Sioux Frazier's mother Holly Hatcher Frazier has been with her on the show `Dance Moms’ and has always supported her in her ambitions. Also, Frazier claims that she often encourages her and makes sure she is well grounded. She still keeps Frazier in check with valuable advice that helps her always to work hard and show a lot of perseverance.