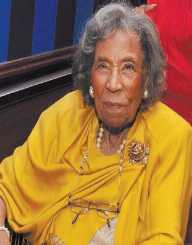 The civil rights activist, Amelia Boynton, is remembered for her leadership in the American Civil Rights Movement. She championed for African Americans to be given equal voting rights. In one instant, the activist was brutally beaten for leading the 1965 civil rights march.

Amelia Boynton was born on 18th August 1911 in Savannah Georgia. Her parents Anna Eliza and George were both African Americans.

Together with her ten siblings, going to church was paramount for them. Her parents believed that education was the only gateway to a successful life.

After completing her primary level education, Amelia Boynton enrolled in Georgia State Industrial College. She later transferred to Tuskegee Institute. In 1927, she graduated with an Economics degree from Tuskegee University. She proceeded to Tennessee State University where she did Education.

She had a short stint as a teacher at Georgia, Boynton. She later found a job as an agent in the US Agricultural Department in Selma, Alabama.

While in Georgia, Amelia Boynton taught the county's rural population on subjects like food processing, nutrition, agriculture, and healthcare. She met Samuel William Boynton, who later became her husband during her time at SEMA.

Despite the difficulty for people of color to cast a vote, Amelia registered as a voter in 1934. Both Amelia and her husband were passionate about seeing that the African Americans were given voting rights.

One of her sons Samuel was once arrested for trespass. He had attempted to buy food in a white restaurant. The boy pleaded guilty of the act and faced a jail term. The Supreme Court, however, overturned the decision.

The death of Samuel fueled the Activism Rights Movement. Amelia's home became the meeting point and the center of a strategy for the activist. She became the first black to run for the congressional seat in 1964 in Alabama. Also, she was the first woman of any race to run under the Democratic Party ticket.

Amelia Boynton led an event named the 'Bloody Sunday' in 1965; she organized a march to Montgomery. The demonstration was led by John Lewis. The local police stopped the demonstrators. After several defiances, the demonstrators were severely beaten.

During the scuffle, Amelia lost consciousness as a result police beating. A picture of her lying unconscious circulated the world. Another march followed two days later. It was led by Martin Luther King Junior. The third march finally reached Montgomery on 24th March.

A vast crowd totaling around 25000 participated in the 3rd march. The third march became an opinion shaper across America. The much-awaited Voting Rights Act was finally given assent by the President in 1965. Amelia was made the chief guest of the event.

Amelia and Samuel William Boynton married in 1936. The couple had two sons, Bruce Carver Boynton, and Bill Jr. together.

After the death of her first husband, she remarried in 1969 to Bob W. Billups, a musician. Her husband, however, died in a boat accident in 1973.

She married James Robinson, her former classmate in 1976. James however, died in 1988.

Due to her age, she retired from Schiller Institute in 2009. She later returned to her hometown at the age of 99, to give a speech at Savannah State University.