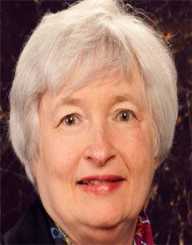 Janet Yellen is an American economist. She was nominated to the position of the Chair of Board of Governor of the Federal Reserve System.

In Brooklyn, New York City in the United States, Janet Yellen was born Janet Louise Yellen. This was in the year 1946 on the 13th day of August. She had the privilege of being raised in a very polish family of the Jewish origin.

Her Mother Anna Ruth was an elementary school teacher, her dad Julius Yellen was a family physician. Janet had an elder brother John.

Janet Yellen graduated as a valedictorian from Fort Hamilton High school in the Bay Ridge. In 1967; she got her degree in economics from the Pembroke College in Brown University.

Although Yellen had started as a Philosophy student, her professor’s influence contributed significantly to her change of mind to take up economics. Janet later got her Ph.D. from the University of Yale in the year 1971. Yellen was considered one of the brightest and most memorable students in her doctoral classes apart from being the only Woman in that class.

With her Ph.D., Janet Yellen managed a job at Harvard University as an assistant professor from the year 1971-1976. This didn't last long before she was nominated to the Federal Reserve Board of Governors in the year 1977-78.

Janet’s career continued to gain momentum with the appointment to the post of a lecturer at the school of economics and political science in London. She served from 1978-1980. She conducted several types of research at the Haas School as a part-time and full-time MBA and undergraduate student.

Janet Yellen, the devoted and self-driven student, also taught macroeconomics. Yellen was outstanding in her teaching, as a result of her excellent performance, she was twice awarded the Haas, s Schools outstanding Teaching awards. Yellen currently serves as an Emerita professor at the University of California, a sure proof of the fruits of hard work and determination.

Apart from the earlier appointments, Yellen contributed greatly to the Yale Corporation as she went on with service as the president of the Western economic association international, former vice president of the American Economic Association.

In 2010 Janet was nominated by President Obama as the successor of Donald Kohn. She took up the position of Federal Reserve System vice-chair.

October 9th, 2013, Janet Yellen got her official confirmation to the position of the Chair of the Federal Reserve System replacing Bernanke. In 2017 President Donald Trump nominated Jerome Powell to succeed Yellen. Janet was also appointed to other executive job positions apart from the political appointments.

Janet Yellen was outspoken about the consequences that have resulted from the boom in the housing prices, is the president of and chief Executive officer of the Federal ban, she had the entire mandate to give direction on matters of the economy. Janet became a voting member of the Federal Open Market in 2009.

Janet Yellen was married to George Arthur Akerlof, an American economist. They were blessed with a son Robert Akerlof.

Janet Yellen is a well respected and eminent personality. She has achieved a lot from her hard work, her first award was the Wilbur Cross Medal in the year 1997 from the Yale, and she was later recognized with several other awards.

They include The doctor of Humane Letters from Bard College. The London school of economics also recognized her in the year 2015 with Honorary Doctorate.2010 came with the Adam Smith Award.  This was followed by the Distinguished fellow of the American Economic Association in 2012; the good tidings kept on flowing in, the same year Janet was included in the list of the most influential of Bloomberg Markets magazine. In 2014 she was named the second most powerful woman by Forbes.

Janet Yellen was this year nominated for the SIPA award during the 2018 Global leadership Award gala.

Janet Yellen was determined to achieve the best through her hard work and determination, to succeed in life one has to focus on their goal, dream it practice it, and grow it. Janet made sure she impacted herself with relevant education and knowledge and to excel in her carrier.