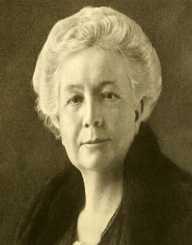 Anna Bissell was a Canadian born American businesswoman, who became the first CEO of a company in the US.

Anna Bissell was actually born as Anna Sutherland in Pictou, County, Nova Scotia, Canada on December 2, 1846. She was the daughter of William, a maritime captain, and Eleanor. She moved with her family to De Pere in Wisconsin, USA. Like many immigrants, her father settled in the US with the hope of a better future for his family.

Bissell went through the education system in the US. She graduated and became a teacher at the age of 16 years. At the age of 19 years, she married Melville Bissell and adopted her matrimonial name, Anna Sutherland Bissell. The couple moved to Kalamazoo, and later to Grand Rapids in Michigan.

Bissell noticed the efficiency of the new invention and decided to market it. She became the salesperson for the new carpet sweeper. Bissell went through the neighboring towns, promoting the carpet sweeper. She sold the product for USD 1.5 as the initial offer. Bissell solicited for business orders and shipped the commodity. At the client’s store, she ensured the knocked down kits were assembled in order. She created a market base for the product with her efficiency, professional customer care, and after-sales service.

In 1884, a fire gutted don part of the company manufacturing factory. Bissell went for financing from the local banks. With a good business name and supportive references in the business world, Bissell acquired the financing. She restored the operations of the factory in three weeks.

In 1889, Melville died leaving the company to his wife. Bissell took over the helm of the company daily operations as the Chief Executive Officer. She became the first woman in the US to head a registered company as its CEO. She devised a plan to maintain both the chinaware and the carpet cleaners within the Bissell Company.

She secured trademarks and patented the product from being pirated. She instituted highly efficient guidelines on marketing the products. A decade later, Bissell Company was the largest manufacturer of carpet sweepers in the world. She exported the cleaners to Europe and Latin America. Bissell became the president of the company board in 1919.

As president and chairman of the board, Bissell initiated sweeping institutional changes to modernize the company. She incorporated the hitherto unheard labor policies in the workforce world. She created fixed working hours and annual leaves for the workers. Bissell introduced workman’s compensation policy. It catered for the restitution payments for the workers in the event of an accident while on duty. Bissell company employees got a pension plan to cater for their upkeep after retirement from the company.

In her time as the president of the company from 1889 to 1919, Bissell exhibited immense knowledge of the business structure of the company and the market. As chairperson of the board, she introduced new employee benefits. She gained the reputation of a motherly figure to the workers. She exuded a personal touch to the needs of her workers. These attributes generated a working environment that propelled the lasting loyalty of workers to the company.

Bissell became the pinnacle of benchmarking in the industry to her peers. Despite her little formal education, she had a business mind and an entrepreneurial spirit.

Bissell extended her innovative nature to society. She generously donated and participated in charitable events. She served as part of the Methodist Episcopal Church board. She created and participated in the activities of the Bissell House in Grand Rapids in Michigan. The house was a center for assimilation of immigrants into society. Bissell was a board member of the Blodgett Children’s Home.

Bissell participated in women empowerment social clubs. She was an active member at the Ladies Literary Club. She participated in the activities of the Women’s City Club, Zonta, and the Clark Memorial Home. She was admitted to the National Hardware Men’s Association as the only female member.

Anna Bissell married Melville Bissell and got five children in their marriage. They were Anna Dotelle, Lillie May, Melville Reuben, Harvey, and Irving Joy.

Anne Sutherland Bissell died on November 8, 1934, in Grand Rapids in Michigan. She outlived her husband by 45 years. She was buried at the Oakhill Cemetery in Michigan.

The Grand Rapids community honored her life with a commemorative statue. In July 2016, they unveiled a bronze statue at the DeVos Place in Grand Rapids. Her residence in Grand Rapids was bought by the media and now houses the WOOD-TV station owned by the NBC television station.

The carpet sweepers evolved over the years to be the vacuum cleaners used in the modern world. Her innovative business acumen transformed the little unknown company product into a global item.