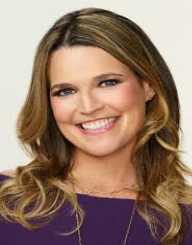 Savannah Guthrie is an American actress, journalist, broadcaster, and lawyer. Currently, she is an anchor and program host with the NBC News.

Born on December 27, 1971, Savannah Guthrie was named after her matriarch. One in the family of three siblings, Savannah Clark Guthrie, was born in Melbourne Australia. Her father was an American mining engineer who was then working in Australia.

In 1973, the family relocated back to the US. They settled in Tucson in the state of Arizona. Sadly her father passed away when she was barely 16 years.

After leaving Amphitheater High School, Savannah Guthrie enrolled for college at the University of Arizona. With her mother’s encouragement, she opted to major in journalism. She earned her degree in Arts having majored in journalism in 1993. Later in her career, she went back to college for another degree. This time she graduated with a Law degree from Georgetown University in 2002.

Soon after her graduation from journalism school, Savannah Guthrie got a job at a local television station in Missouri. She stayed for two years before leaving for KVOA. This was an affiliate station for the NBC News based in Tucson. This was in 1995.

In 2000, she moved to another media house. At the WRC-TV, she was exposed to the front media coverage during the terrorist attack of the Twin Towers and the Pentagon. Other significant events she covered were the anthrax attacks on major personalities in the US.

After a brief stint in studying and practicing law, Guthrie was back to the media fraternity. She joined the NBC News as a member of their legal journalism team in 2007.

The following year Savannah Guthrie was seconded to the White House. Guthrie stayed as the White house reporter until 2011. Her most notable events were during the campaign rallies of Republican Vice Presidential candidate Sarah Palin in 2008.

Guthrie has also covered detailed interviews with other white house staff, including former President Barack Obama and members of his administration. In addition to the white house placement, Guthrie would occasionally anchor on the Nightly News at the NBC News Studios.

In 2011, Guthrie moved to the NBC News head office. She became the host of Today, a morning television talk show airing on NBC News. She has been at the show since then. As the host of Today, Guthrie has had many interviews with an array of personalities. Among them is Donald Trump, Dr. Conrad Murray among other high profiled figures.

Though not a career actor, Savannah Guthrie has featured in one film. The 2015 production was titled Sharknado 3: Oh Hell No. This comedy horror film cast Guthrie as herself in the production.

In her family life, Savannah Guthrie was first married to fellow journalist Mark Orchard at the end of 2005. The union lasted for only four years. In 2009, they separated and divorced.

Guthrie then got married to Michael Feldman in March 2014. They have two children. Their firstborn girl Vale was born in August 2014. The second born Charles came in December 2016. The couple with their children still resides in New York.

Savannah Guthrie is also an avid outdoor person. Guthrie once teamed up with a partner to play tennis exhibition march against world champion Rodger Federer and his teammate. As it were, Team Guthrie lost.

At the age of 47, Savannah Guthrie has been through the courtroom, the corridors of power in the White House and hosted a favorite television show. The little girl who never knew the thing she wanted to study ended up taking her mother’s choice. In the end, she has proved that the inspiration of her mother was right. Today, Guthrie is a role model and inspiration to many young upcoming female journalism personalities across the US.

Despite her positive contribution, she has had her fair share of controversy. While hosting her morning show, Guthrie irritated her viewers when she equated lactating a baby to going to the washroom. To many of her viewers, that was a show of disrespect to motherhood.