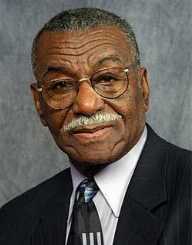 Frederick Lee “Fred” Shuttlesworth was an American minister and civil right activist. Born on March 18, 1922, he joined other activists in the fight against segregation and racism. Together with Martin Luther King, Jr. and others, he found the Southern Christian Leadership Conference (SCLC) aimed at ending racism in the South. Shuttlesworth also worked with Martin Luther King Jr. during the civil rights movement.

Frederick Lee Shuttlesworth was born Fred Lee Robinson on March 18, 1922, in Mount Meigs, Alabama. Following his mother’s second marriage to William N. Shuttlesworth, he adopted the surname Shuttlesworth. He grew up in rural Alabama on his stepfather’s farm. After graduating from high school, he worked as a truck driver. However, he later decided to go into pastoring. He, therefore, pursued his B.A. at the Selma University in 1951. Also, he enrolled at the Alabama State College (currently Alabama State University) for his B.S. in 1952. However, Shuttlesworth left Selma to become a pastor at Birmingham’s Bethel Baptist Church.

As a pastor, Shuttlesworth became highly involved in civil rights activism. He, therefore, joined the Alabama state chapter of the National Association for the Advancement of Colored People (NAACP). The NAACP sought among other things to increase voter registration of African Americans. The state of Alabama, however, outlawed the organization in 1956. This led to his formation of the Alabama Christian Movement for Human Rights with Ed Gardner in 1956. It aimed at fighting against segregation laws in Birmingham.

Shuttlesworth suffered several physical brutalities and murder attempts. On Christmas Day in 1956, he narrowly escaped death when sixteen sticks of dynamite planted under his bedroom window blown up. The blast severely damaged his house. While leaving the house, a police officer and member of the Ku Klux Klan warned him to get out of town. In 1957, Klansmen attacked Shuttlesworth and his wife Ruby, after they tried enrolling their children in a previously all-white school in Birmingham. They beat him mercilessly with brass knuckles and chain with one member stabbing his wife. His attackers included Bob Frank Cherry, who later participated in the 16th Street Baptist Church Bombing.

Shuttlesworth co-founded the Southern Christian Leadership Conference in 1957. Other co-founders included Martin Luther King, Jr., Joseph Lowery, Ralph Abernathy, A. L. Davis, Charles Kenzie Steele, and T. J. Jemison among others. The organization adopted a non-violent approach to its activism. It, therefore, picked the motto "Not one hair of one head of one person should be harmed." In 1960, he took part in the sit-ins against segregation. The following year, he was involved in the Freedom Rides. Southern Christian Leadership Conference in August 2004. However, he resigned a year later due to what he termed as mistrust and deceit among the group.

Shuttlesworth left Birmingham for Cincinnati, Ohio in 1961 to take charge of the Revelation Baptist Church. In 1966, he founded the Greater Light Baptist Church. He established the "Shuttlesworth Housing Foundation" in 1988 to help families who could not afford to buy a house.