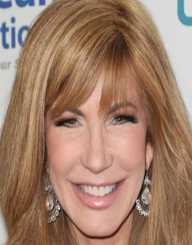 Leeza Kim Gibbons was born on 26th March 1957, at Hartville, South Carolina in the U.S.  She hosted famous talk shows including Leeza show in NBC. She also hosted Holly Confidential show in radio a program that was highly rated.

Leeza Gibbons' parents were Jean and Carlos Gibbon. She was raised in Irmo, South Carolina. She went to Irmo High school and later joined the South Carolina University, where she did Journalism and mass communication.

Leeza Gibbons' father, Carlos Gibbons, was a state superintendent in charge of education. Her family owned an antique shop. She had two siblings, Cammy, her sister, and Carlos Jr. her brother.

A chimpanzee named Martha was adopted by her father. It was later taken to an animal sanctuary when its management became difficult.

Her book, Take Your Oxygen First, tells the story of how her family struggles, after her mother's diagnosis of Alzheimer's disease.

Leeza Gibbons has gone into four marriages. First John Hicks, they were married for two years, 1980 to 1982. Later in 1989, she married Christopher Quinten, a British actor. The two had a daughter together. Their marriage however ended in 1991.

Later after her divorce with Christopher Quinten, she married Stephen Meadows, an actor. They sired together, Troy and Nathan. Their marriage lasted for nine years.

Her current marriage is with Steven Fenton, an author of the New York Times.

Leeza Gibbons has been in the entertainment sector since 1976. At a young age, she worked at KFDM-TV and later WFAA- TV before she then moved to New York City to work in WCBS TV.

At WCBS- TV, she, and Robb Weller co-hosted The Two on the Town show. She later took over the show Entertainment tonight and was later joined by Rob Weller.

She concurrently hosted her talk show Leeza, from 1993 to 2000. In 2001 Gibbon was given a new task on television, she was appointed as a managing editor of Extra, a television show.

Arnold Schwarzenegger, California Governor, appointed Gibbons to join the board, whose task was to oversee the California Stem Cell Research agency.

Leeza Gibbons did two shows from 2011 to 2015, she hosted, My Generation and PBS show. Her career on radio saw her host a radio show called Blockbuster Top 25 Countdown with Leeza Gibbons.

Leeza Gibbons released a mineral make up line called Sheer Cover Studio in early 2000, a product that is sold across the world to date.

Her products crossed a $1 million in 2015, where she was rewarded by Electronic Retailing Association the Icon Award.

Despite her career being in the media where it is difficult to avoid criticism and controversy, Leeza Gibbons has managed to stay away from controversy. She has never found herself in the negative spotlight.

Leeza Gibbons' television series My Generation won her Daytime Emmy Award in 2013. In 2015, her reality show, won Celebrity apprentice, becoming only the second winner female to win the Award.

Her work on children's issues won her Congressional Horizon Award.