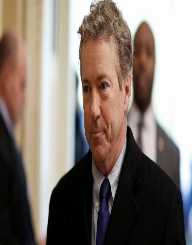 Randel Howard Paul is an American politician and physician. Born on January 7, 1963, he has since 2011 is serving as the United StatesSenator from Kentucky. Serving alongside his father, Ron Paul, A US Representative for Texas 22nd congressional district, made him the first senator to serve alongside a parent in the House of Representatives.

Rand Paul started a professional career as an ophthalmologist in Bowling Green, Kentucky in 1993. In 2007, he established his own clinic. Devoting himself to his father’s political campaign, Paul gained interest in politics. He was a member of his father’s campaign team when he ran for the Republican’s presidential nomination in 2008.

In 2010, he contested on the ticket of the Republican and won to become a Senator from Kentucky. Rand Paul supports the Tea Party movement and regards himself as a Constitutional conservative. Just like his father, Paul unsuccessfully contested the Republican presidential nomination for the 2016 US presidential election.

He finished fifth out of 12 Republican candidates at the Iowa caucuses. After that unsuccessful bid, he returned to contest as a senator and retained the seat of Kentucky.

Randel Howard Paul was born to Carol (née Wells) and Ron Paul on January 7, 1963, in Pittsburgh, Pennsylvania. Ron Paulis a former US Representative from Texas. Paul is the third child of five by his parents with siblings including Ronald "Ronnie" Paul Jr., Lori Paul Pyeatt, Robert Paul, and Joy Paul-LeBlanc. Growing up, his Randel became Randy and would later be changed to Rand by his wife.

In 1968, the family moved from Pittsburgh to Lake Jackson, Texas where his father started practicing medicine as an obstetrician. Paul received his education from the Brazoswood High School, where he played defensive back in the school’s football team and part of the swimming team. After graduating, he enrolled in an honors program at Baylor University from 1981 to 1984.

While there, he joined the swimming team and the Young Conservatives of Texas. Rand Paul was also a member of the secret court The NoZe Brotherhood. Paul left for Duke University School of Medicine without completing his baccalaureate degree at Baylor University. In 1988, he received an M.D degree. He did his general surgery internship at the Georgia Baptist Medical Centre and then completed his residency in ophthalmology at Duke University Medical Centre in 1993.

Rand Paul left Texas to Bowling Green, Kentucky after his residency in 1993. Gaining his state medical license, he started practicing at Downing McPeak Vision Centers as an ophthalmologist for five years. After Downing, he worked with Grave Gilbert Clinic in Bowling Green. He will work there for the next ten years. His next move was to establish his medical facility. Throughout his practice, he faced two malpractice lawsuits in 1993 and 2010. One case ended in settlement of $50,000 while he was cleared on the other.

Rand Paul became politically active while at Baylor University by heady the Young Conservatives of Texas. He also joined his father’s campaign team throughout his campaigns as a senator and presidential ambitions. In 1991, he founded the North Carolina Taxpayers Union as president Bush failed to keep his promise of not raising taxes. Three years later, he founded and chaired the anti-tax organization Kentucky Taxpayers Union.

In July 2009, the incumbent Republican Senator for Kentucky decided not to seek re-election and with that Rand Paul who had been considering replacing him, declared his intention to run for the seat. He was able to raise about 3 million from fundraising to support his campaign.

His contender for the Republican slot was Secretary of State Trey Grayson. Grayson was tipped to be the winner as he had support from Senator Mitch McConnell and former Vice President Dick Cheney among others.

However, Rand Paul was able to beat Greyson by a 23% margin at the Republican Senatorial primary. During the November 2010 general elections, he faced Democrat’s Kentucky Attorney General, Jack Conway. He was able to defeat Conway polling 56% of the votes with Convey having 44%. On January 5, 2011, Paul was sworn into office along with his father who had retained office as US Representative from Texas.

As a junior senator, Rand Paul was put on the Energy and Natural Resources, Small Business, Homeland Security and Government Affairs and the Labour and Pensions committees. Along with Mike Lee and Jim DeMint, he formed the Senate Tea Party Causes. Paul proposed a $500 billion cut from federal spending in one year. Several sectors including defense, department of education and the department of homeland security were to have a budget cut in his first legislative proposal.

In 2013, he gained media attention for his long filibuster speech in the Senate where he spoke on vast topics, including being against the confirmation of John Brennan as the new head of the CIA and his objections to President Obama's policy of using unmanned drone strikes against terrorists. He opposed the attempt by Congress to replace the Obamacare in 2017despite being supported by an executive order from President Trump.

On April 7, 2015, Rand Paul announced his intentions to contest for the Republican presidential candidacy in 2016. He was able to raise $1 million within a day of his announcement. A series of interviews followed. After the Democrat Hillary Clinton revealed her intentions to contest for president, Paul launched series of attack on her declaring that she will be a disaster as president.

Rand Paul dropped his presidential ambition after a poor show at the Iowa Caucus. He then returned to seek re-election as a senator and retained the seat.

A neighbor of Rand Paul assaulted him outside his Bowling, Green, Kentucky home. He was mowing his lawns when he was attacked. Initially, it was reported that he suffered minor injuries, but it was later reviewed that the senator had a bruised lungs and five broken ribs.