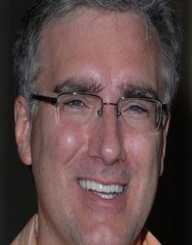 Keith Theodore Olbermann was born 27th January 1959, to Theodore and Marie Olbermann. He was born in New York City, New York, in the United States. His father was an architect, his mother a kindergarten teacher, and he had a younger sister named Jenna.

Olbermann studied at Hackley High School, and after graduation in 1975, he went to Cornell University.

Olbermann was introduced to baseball by his mother, who followed the New York Yankees. He developed a keen interest in the sport and wrote articles about collecting baseball cards. He became an authority on the subject and was often in magazines providing the know-how to the readers.

He graduated from university in 1979.

Keith Olbermann's career began on radio, and from there he went to CNN in 1981. He continued working on radio through the 1980s in New York City, and in 1984 he went to Boston as a sports anchor for one of the television networks.

From Boston, Olbermann moved to Los Angeles to work in radio once more.

In 1992, he started work with ESPN on a show called SportsCenter. He was with the show until 1997. He also worked with ESPN2 during the same period to establish the network after it started.

In 1997, Keith Olbermann caused controversy when he appeared on an opposition network without prior permission, and he had to stand down for a two-week period as punishment. He left ESPN later that same year in an apparent disagreement with management.

For the next ten years, ESPN and Olbermann were at loggerheads with each other.

Olbermann soon found himself work and joined MSNBC with his show, The Big Show with Keith Olbermann. The show aired nightly and covered sports as well as current affairs.

He then started working as an anchor at Fox Sports Net in 1999. He had his show, The Keith Olbermann Evening News, where he was the anchor as well as the executive producer. After some disagreement with the owner, Rupert Murdoch, Olbermann was fired in 2001.

In 2003, Olbermann’s show Countdown premiered on MSNBC. It was a nightly show that covered several news events that had occurred that day. In 2004, he started a blog for Countdown, called, Bloggermann.

Countdown proved very successful for Keith Olbermann and developed into a show that covered the big stories, had guests, and special segments. Once again, in 2008, Olbermann caused controversy when he allegedly made political statements that favored one side more than the other. Two years later, during the 2010 presidential campaign, Olbermann made donations to several candidates from the Democratic Party.

The practice was against company policy, and Olbermann was suspended without pay by the network management. A petition was launched to have Olbermann reinstated, and garnered more than 250,000 signatures. Olbermann was back in the chair by early November, but he left the network in January 2011.

Keith Olbermann also did radio after leaving Fox Sports. He started on ABC Radio, but in 2005 went back to ESPN Radio. After two years, Olbermann started with NBC on their NFL show that aired before the main game on a Sunday night. He did the show for two seasons.

After leaving MSNBC, Olbermann joined Current TV as the Chief News Officer. He was later fired in 2012.

In 2013, Olbermann signed a two-year contract with ESPN2 and hosted his show that aired each evening. In 2015, he once again found himself surrounded by controversy after making adverse remarks about Penn State University, and he was stood down for a week. A few months later, in July 2015, ESPN replaced Olbermann.

In 2016, Keith Olbermann worked through the internet, with a series called The Closer with Keith Olbermann that covered the 2016 Presidential Election. The show was aired through GQ.com, and by early 2017 had been viewed several million times. Olbermann left in 2017.

Olbermann began work with ESPN again in 2018. He started as a guest presenter, making an appearance on SportsCenter for the first six months of the year. For the second half of the year, he once again became the regular host.

Keith Olbermann has won many awards and honors, including 11 Golden Mike Awards, and a Cable ACE Award.