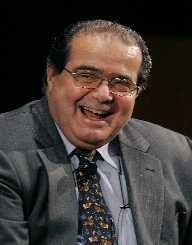 Antonin Gregory Scalia was born in Trenton, New Jersey on March 11, 1936. He was the only child of his parents. His father Salvatore was an Italian immigrant who graduated from Columbia University and became a professor of Romance languages at Brooklyn College. His mother Catherine was an elementary school teacher.

In 1939 the family moved to New York. There, Scalia completed eight grade of public school and obtained a scholarship to Xavier High School. He graduated as the first in his class and served as the valedictorian. As a young boy, Scalia was very focused on his schoolwork and was also an active Boy Scout.

Antonin Scalia began his career at the Jones, Day, Cockley and Reavis international law firm in Cleveland. He worked for the company for seven years. He was highly appreciated by the law firm, but his dream was to teach. Scalia left the firm and became a law professor at the University of Virginia.

In 1971, Scalia entered the public service, when President Richard Nixon appointed him as the general counsel for the Office of Telecommunications Policy. His principal assignment was to formulate a policy for cable television growth. In 1974, Scalia was nominated by the president to be elected as the Assistant Attorney General in the Office of Legal Counsel.

After the Watergate scandal, Antonin Scalia was questioned many times before congressional committees. He defended the Ford administrations assertions of executive privilege to refuse to turn over documents. In 1976, Scalia argued his only case before the Supreme Court. He won the Alfred Dunhill of London, Inc v. the Republic of Cuba.

On behalf of the U.S., Scalia supported Dunhill. After Jimmy Carter took office, Scalia worked for the American Enterprise Institute and later returned to academia. He worked at the University of Chicago Law School until 1982.

Rise to the Supreme Court

In 1980, Ronald Reagan was elected, and Antonin Scalia hoped for a high position in the administration. He was interviewed for the job of Solicitor General of the United States but was not granted the status. He was also offered a seat in Chicago on the U.S. Court of Appeals, but he declined it. In 1982, Reagan offered him a seat on the D.C. Circuit, and Scalia accepted.

On the D.C. circuit, Scalia had a reputation as an influential and witty writer. His opinions drew the attention of Reagan’s administration, and he was listed as the leading Supreme Court prospect. Although there was no vacancy at the Court, during 1985, Scalia was still put on the short list, in case a justice would leave.

In 1986, Chief Justice Warren Burger informed the Administration of his plan to retire. A new Chief Justice was appointed, and associate justice William Rehnquist became the new Chief Justice, and Antonin Scalia took his place on the Court. He was the first Italian-American justice to be appointed.

Antonin Scalia has often been seen as one of the most prominent legal thinkers of his generation. He had a reputation for being combative and sometimes even insulting. His agreed with the judicial philosophy or originalism - the view that Constitution should be interpreted as what it theoretically meant to those who ratified it. This belief is conflicting with the majority view that the constitution is a “living document.”

In this sense, the courts can take into account the views of contemporary society. Scalia believed that the Constitution should impede change to fundamental rights and responsibilities of the citizens. He has been criticized for his beliefs since they impend progress. Antonin Scalia has also been criticized for allowing his personal views to get in the way of his judgment.

Antonin Scalia has been the significant anchor for the conservative majority of the court at this time. He became a political celebrity with the groups agreeing to his views. One of the brightest examples of his work was when Scalia voted to uphold freedom of speech and to strike down the prohibition on hate speech. He limited the rights to an abortion too. He also played a significant role in handing the 2000 election to George W. Bush against Gore.

During his time as Supreme Court Justice, Scalia often visited schools and Universities. He was very in-tune with the students of his time. During his time in the Court, Scalia was most often the topic for law review articles.

Antonin Scalia was a devoted Roman Catholic. He has often been criticized for taking his Christian beliefs into account and not being objective. One of these occasions was when Scalia ruled to limit the rights for abortion. He has publicly stated that his ideas are consistent with the traditional religious views of Catholicism.

Antonin Scalia and his wife Maureen McCarthy were married on September 10, 1960. They met on a blind date while he was a law student at Harvard. She was at the time studying in Radcliffe College and later obtained a degree in English. The couple had nine children - five boys and four girls.

Scalia and his fellow Justice Ruth Bader Ginsburg were close friends, despite their opposite political views. The Ginsburg and Scalia family have dinner together every New Year’s Eve.