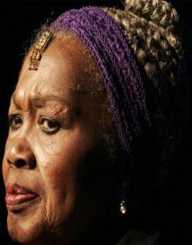 Odetta was an Afro American singer from the south. Often than not, she was revered as the musical mouthpiece of the civil rights movement.

Odetta was on December 31, 1930, in Birmingham Alabama. At birth, her parents named her Odetta Holmes. Her father Reuben Holmes died in Odetta’s childhood. Her mother Flora remarried. The children then assumed their stepfathers' family name Felious. She would later drop the adopted family name. She assumed the name Odetta in any official function.

The family moved to Los Angeles in 1937. In California, she went to Belmont High. She graduated from with a degree in music from Los Angeles City College in 1950.

Odetta's initial experience came when she toured with the musical outfit Finian’s Rainbow. The tour left a decisive mark in her heart. She concentrated in singing the deep Alabama folk songs she grew up listening to. Odetta played in various California nightclubs.

Her first recording titled Odetta and Larry came in 1954. She broke up with Larry to pursue a solo career. From 1954 to 1960, Odetta sang and produced several songs. Her 1956 song Odetta Sings Ballads and Blues sent ripples in the folk music world. She also had a short production with Harry Belafonte.

During the 1960s, Odetta was caught in the civil rights wave that swept throughout the US. Despite her political involvement, she continued to record songs. She was invited to the Newport Folk Festival on four occasions. This happened from 1959 to 1965.

One of her memorable occasions was her performance at the White House. She performed at the behest of the US President John Kennedy.

Odetta returned to the recording studios in the 1980s. Like before she released folk music albums to the delight of her fans. Some of her later productions are Movin’ It On done in 1987. Then in 1999, she produced Blues Everywhere I Go. Her album Looking for a Home was a hit in 2001.

Odetta had two tours in her late years. The first one was in 2007. That year, she recorded the album Gonna Let It Shine. The album gave her a Grammy nomination. With musicians from all the continents, her Fall Concerts Tour was a significant achievement. In 2008, she toured major cities in the US. In nearly all performances in the 2008 tour, Odetta was in her wheelchair.

The 1960s were the culmination of the civil rights movement in America. Like many other artists, Odetta used her music to lend a voice in the struggle. Her efforts were crowned when Rev. Martin Luther King Jr christened her the Queen of American Folk Music. To crown her political activism, Odetta was asked to perform at the famous March To Washington. This march was made famous by the I Have A Dream speech delivered by Rev Martin Luther King Jr. she performed O Freedom. This became the national anthem of the civil rights movement.

Odetta married her first husband Dan Gordon in 1959. The couple divorced soon after. The second marriage was to Gary Shead. As in the first marriage, she ended up divorcing Shead. She went into her third marriage in 1977. She became the wife of Iverson Minter. Minter also went by the name Louisiana Red in the musical circles.

After battling with poor health from 2008, Odetta finally died on December 2, 2008. She was a month shy of her 78 birthday. The official cause of death was given as cardiac malfunction. Her memorial service was done at the Riverside Church in New York. In the congregation were the princes and princesses of rhythm and blues, folk music and jazz.

Many musical greats like Harry Belafonte acknowledged how Odetta inspired their careers. Her influence went over her musical boundaries. Political and civil rights activists were inspired by her concerts. She was arguably the best of her generation. Some of her songs became soundtracks for films in Hollywood.

Odetta was also honored with merits in her lifetime. The then US President Clinton merited her with a national award in 1999. She was awarded a National Medal Of Arts. She became a Kennedy Center honorable member in 2004. The following year, Odetta was given the Living Legend Award. This was presented to her by the Library Of Congress.