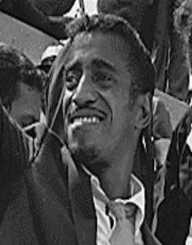 American entertainer and singer Sammy Davis Jr. was born on the 8 December 1925 in Harlem, New York. He was born into a family of entertainers. His father was the lead dancer, and his mother was in the chorus of a vaudeville troupe led by his uncle, Will Mastin.
When his parents were touring, Davis Jr was left in the care of his father’s mother, Rosa Davis. After his parents divorced, his father won custody of Davis.

Sammy Davis Jr. was schooled by his father and various tutors when touring, so his education was limited.

Sammy Davis Jr. was only three when he first appeared on stage in vaudeville. At the age of 7, he made his film debut in Rufus Jones for President. He toured with his father and uncle as the Will Mastin Trio throughout the 1930s and 1940s until he was drafted into the U.S. Army during World War II.

Sammy Davis Jr. did his basic military training in Wyoming (1943)  and experienced racism to the extent that he was often in physical fights during his first 90 days in the army. He used the negativity to energise his performances at camp shows.

After returning home from World War II, Sammy Davis Jr. again began performing with his father and Will Maslin. They entertained at hotels and clubs in Las Vegas, Miami, and New York City. Besides singing and dancing, Davis was beginning to mime and do comedy. He also incorporated various instruments including the piano, trumps, and drums. After he made a recording of The Way You Look Tonight, Metronome magazine awarded him their Most Outstanding New Personality (1946).

The Maslin Trio began appearing as the opening act artists such as Frank Sinatra, Bob Hope, Mickey Rooney, and Janis Paige. Davis released his first album in 1954, with Decca Records. Davis was by then emerging as the star attraction within the trio. He was in demand as a nightclub performer, a successful recording artist and started appearing on Broadway. He also formed close friendships with Sinatra and Dean Martin and was part of the group referred to in the media as The Rat Pack.

Stage roles included the musicals Mr. Wonderful (1957), Golden Boy (1964) and Stop the World - I Want to Get Off (978). Davis Jr appeared in numerous television shows. He was a good friend of Elvis Presley and appeared, uncredited, as himself in That’s The Way It Is (1970). Frank Sinatra, Dean Martin, and Davis acted together on a number of occasions.

Sammy Davis Jr. was inducted posthumously into the Grammy Hall of Fame for What Kind of Fool Am I? (1962) in 2002. He also was awarded a Grammy Lifetime Achievement Award (2001).

In 1990, he won an Emmy Outstanding Variety, Music or Comedy Award for Sammy Davis Jr.’s 60th Anniversary. Other awards and acknowledgements include a star on the Hollywood Walk of Fame (1960),  a 1965 Tony Best Actor in a Musical Award for Golden Boy, a Special Citation Award in 1974 from the National Academy of Television Arts and Sciences. Other distinctions are a star on the Las Vegas Walk of Stars (2006) and an induction into the International Civil Rights Walk of Fame at the Martin Luther King Jr. National Historic Site.

When Sammy Davis Jr. and Kim Novak began dating in 1957, the president of Columbia Pictures, Harry Cohn, was furious because he believed that their relationship would cause problems with audiences and Novak was marked as a future star to replace Rita Hayworth. Cohn arranged for Davis to be kidnapped and threatened by a friend, influential mobster, John Roselli. The ploy worked and shortly afterwards an arranged marriage of convenience between Loray White and Davis took place.

Sammy Davis Jr.'s 1960 inter-racial marriage to May Britt: Historically, it is seen as one of the unions that opened up society and changed attitudes. The couple was subject to stress and racial abuse both in the U.S. and when they visited the United Kingdom. Davis campaigned for President John F. Kennedy during his presidential campaign but was snubbed on two occasions.

The first occasion was when Davis’ invitation to Kennedy’s inauguration ball was withdrawn at the last moment. The second time was when Davis and his wife were invited to a reception for African-American leaders (1963), and when Kennedy saw them, he asked aides to get them to leave.