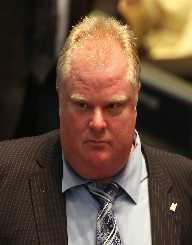 Robert Bruce Ford was a highly controversial Canadian Politician and businessman that served as the Mayor of Toronto from 2010 to 2014.

Robert Bruce Ford was born in Etobicoke, Canada on May 28, 1969, to Ruth Diane and Douglas Bruce Ford Snr. He was the last of four children, and his paternal parents were English immigrants. Rob attended Scarlett Heights Collegiate where he dreamed of being a professional footballer. He went to Carleton University, Ottawa where he studied Political Science, and although he made the football squad, he didn’t play. He dropped out of Carleton and started working with his father at Deco labels. It was a family owned business, and his mother was the director of the company. At the death of Doug Snr, the family retained ownership of the business.

Robert Ford was city councilor for three terms from 2000 to 2010. He was an active proponent of budget cuts. He also developed a reputation for passionate speeches. He once suggested during one of his statements that money not is spent on putting suicide barriers on bridges instead they should be used to round up child molesters who are the real reasons why people jump off bridges. He also had a reputation for dealing with constituents problems on time.

His gained a lot of popularity due to his style. He registered and was voted in as Mayor of Toronto in 2010. His mayoral term ended on November 30, 2014.

Despite the controversy that trailed his Mayorship he announced his intentions to run again for mayor.

Rob Ford’s was a very controversial personality. He was notorious for not having a filter in his tongue. He was known for making several controversial comments. One of which was calling Canada’s Prime Minister, Justin Trudeau, a ‘Fag’. In 2006, he was publicly against the city spending 1.5 million dollars to prevent AIDS claiming that no one needs to be concerned with AIDS. He had to publicly apologize during his mayoral campaign for 2010 when his opponent, George Smitterman called him out on it.

Rob Ford also was subject of a lawsuit by his sister-in-law’s former domestic partner, Scot. Scot had been jailed following an altercation with Rob. The suit claimed 1.5 million dollars on the allegation that Rob hired two of his old football player friends, Aedan Petros and Payman Abdoodowleh to beat him up in jail.

The most popular controversy in Rob’s career amongst several was his substance abuse scandal and his admission of guilt. He, however, refused to resign after this. In his own words

“I’ve run a fantastic city. I don’t want to toot my own horn here, but I’m the best mayor this city has ever had.”

After this, a lot of mayoral responsibility was passed on by the city council to his deputy, Norm Kelly as a compromise since he refused to resign from office.

Despite all the issues that dogged his career, Rob’s personality still appealed to many. It was said of him that he was one of the few that always championed the cause of the underdog. His supporters brushed aside his drug scandal. They said it was a testament to his humanity. According to them, his death was a significant loss to Toronto.

In 2000, Rob Ford married Renata Brejniak who he had met in high school. The couple had two children together.

His marriage was also fraught with its problems. In 2008, 911 got a call from their house, and Rob was charged with assault and threatening to kill his wife. Due to the inconsistencies of her claims and credibility issues according to Rob’s attorney, the wife lost the case. Rob eventually claimed that they went for marital counseling to work through their problems.

The domestic calls didn’t stop. In 2011, the police received two cases of domestic disputes. On Christmas day of 2011, Rob’s mother in law called 911 concerned because he wanted to take the kids to Florida against their mother’s wish and he had been drinking. Further issues of violence were raised in 2012 and 2013, but as usual, no charges were filed.

In 2014, Rob Ford had to step down from his Mayoral campaign due to an abdominal tumour that turned out to be cancerous. And His brother Doug Jr ran in his place.

He went through series of radiation and chemotherapy over the course of the next two years, but it was unsuccessful as the same cancer strain was found in his bladder. He was cleared on the 21st March, and it seemed there was a ray of hope. He, however, died on the next day, the 22nd day of March 2016 at the age of 46.