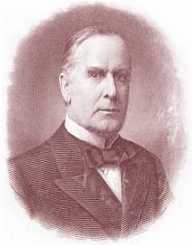 William McKinley was born in Niles, Ohio in 1843. When William McKinley was nine years old, his family moved to Poland, Ohio. He was the son of William McKinley Sr and Nancy Allison, their seventh child. The family was of English and Scots-Irish ancestry. The McKinley’s traced their genealogy back to David McKinley who immigrated to Pennsylvania from Country Antrim, Northern Ireland in the 18th century.

William McKinley was enrolled at Poland Union Seminary, after which he attended Allegheny College in Meadville, Pennsylvania.

William McKinley was working as a teacher until the Civil War broke out. He joined the Union Army as a private and left at the end of the conflict with the rank of major. After the war, he studied law and practiced in Canton Ohio. By this time, his attention was turning to politics. He supported the Republican party. He assisted Hayes in the gubernatorial campaign (1867) and Grant in his run for president (1868). In 1869, he was elected as Stark County’s prosecuting attorney. He lost his bid for reelection in 1871.

There were riots in March 1876. Coal miners in the Tuscarawas Valley were striking for improved working conditions and pay when mine owners brought in strikebreakers. This led to rioting. Governor Hayes sent the militia, and some of the miners were arrested. As a young attorney, William McKinley heard of the plight of the miners and represented them free of charge. His legal argument won. The workers of Ohio never forgot this act

In 1876, when he was thirty-four years old, William McKinley won a seat in Congress. He initially served on the Ways and Means Committee and was perceived as a politician who was on the side of the general public and against private interests. With his legal training, he became the Republican expert on the protective tariff. He was convinced that the tariff would bring prosperity, but by 1890 his Mckinley Tariff had brought him a lot of criticism. William McKinley lost his seat in the Democratic landslide of 1890. The McKinley Tariff was controversial. Business mainly supported it. American consumers feared it, disliking the idea of price hikes.

The Ohio Republican Party nominated William McKinley for governor of the state in 1891. William McKinley won by a narrow margin of three percentage points. McKinley’s first term as governor was moderately quiet, and he easily won reelection in 1893. Then, the Panic of 1893 occurred, and this led to fifty percent of the state’s factory workers losing their jobs. Workers strike ensued and McKinley, mindful of business owners, had to order the state militia to restore order. Republicans were impressed with the way McKinley handled the Panic of 1893 in Ohio. This set the stage for him winning the 1896 Republican nomination for President.

President McKinley: Served from the 4 March 1987 until his assassination on the 14 September 1901.

His administration was also focused on foreign policy. The situation in Cuba was on the ongoing issue, and public pressure forced his decision regarding what became known as a neutral intervention in Cuba in April 1888. During this period of what would be called the 100-day war, the United States attacked and destroyed the Spanish fleet in Cuba, occupied Puerto Rico and temporarily took control of Manila. The United States then annexed Puerto Rico, the Philippines, and Guam.

In 1900, US election, William McKinley won a second term. His presidential term came to a terrible end. In September 1901, he was at the Buffalo Pan-American Exposition when a deranged person shot him. He died just over a week later.

William McKinley was the 25th President of the United States. He served from the 4 March 1987 until his assassination on the 14 September 1901.

The McKinley Tariff. William McKinley put a lot of his energy into protecting the local business against foreign competition.

He went down in history as a capable, kind and much loved President.

William McKinley met his wife-to-be in 1867 when he moved to Canton to establish his legal practice. Ida Saxton was the eldest daughter of a prominent family. Her father was a banker, and he sent his two daughters to the best schools. Ida enjoyed working in his father’s bank, and it was there that she met William McKinley. They fell in love and married. Their first child was Katherine (b.1871), and they had a second child Ida (b.1873). Ida died in infancy, and Ida entered into a deep depressed which exacerbated her already weak health. When Katherine died in 1875 of typhoid, Ida’s health grew even worse. She started having epileptic seizures and became an invalid. The couple remained devoted to each other and Ida tried hard to be a perfect First Lady at the White House, greeting visitors whilst sitting in her wheelchair. After McKinley’s assassination, Ida lived with her sister. She is said to have visited her husband’s grave daily until she died in 1907.

The McKinley family belonged to the Methodist church.