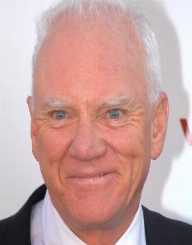 Malcolm McDowell was born on June 13, 1943, in Horsforth, West Yorkshire, England. His parents were Edna and Charles Taylor. He later went by the name Malcolm McDowell as there was another actor at the time named Malcolm Taylor, and he did not want the same name issue to become confusing. This is the name that he is best known for now.

As a child and teenager, Malcolm McDowell spent his schooldays at a boarding school. It was while away at school that he realized he had a love for acting. He appeared in many of his school’s plays.

After he finished his primary education, he went on to attend that London Academy of Music and Dramatic Arts. It was around this time that he changed his name from Malcolm Taylor to Malcolm McDowell.

After finishing his studies at the London Academy of Music and Dramatic Arts, Malcolm McDowell went on to perform in several plays with the Royal Shakespeare Company. He only did this for a short time before he began appearing in television shows in the late 1960’s. Malcolm McDowell first appeared as a guest role in Crossroads in 1964. By 1967, he had a recurring role as the character Frankie in Sat’day While Sunday and as Ernie in The Newcomines.

Malcolm McDowell’s first major movie appearance was in 1968 when he played Mick in the film If, This movie set him up as being a cocky character that audiences loved to hate. It was not long after this, in 1971, that he earned his most famous early role of Alex, the main character, in A Clockwork Orange. This movie helped to make him famous. The movie matched up well with the book, and McDowell was able to portray and twisted Alex wonderfully. It was in part because of this role that he began to be known for playing villains.

The rest of the 1970’s was a highly productive time for McDowell. During this decade Malcolm McDowell starred in some hits like Aces High, Caligula, and Time After Time.

The 1980’s continued to be a productive time for McDowell. During this decade he did a variety of this, from acting as guest characters in television shows (Monte Carlo), from acting in made-for-television movies (Arthur the King) to acting in feature films (Blue Thunder, Get Crazy, and Sunset).

His career did anything but slow down in the 1990’s. By this time he was beginning to show his age, but that didn’t stop him from continuing to act. Malcolm McDowell continued to work on television and film,s and he even took on a voice acting role in the 1990 film Happily Ever After. However, some of his film roles were not as large as the roles he had taken on in the past. Some of his famous hits from this decade include Schweitzer, Assassin of the Tsar, Superman (TV series), Fantasy Island, Pearl, Where Truth Lies, Star Trek: Generations, and Our Friends in the North.

In the early 2000’s, Malcolm McDowell was all over the place. He had several roles in made-for-television movies; he had several voice roles in movies, television shows, and even video games; and he still acted in hit movies. Some of his most famous movies from the beginning of the 2000’s to today are listed below. As of 2017, McDowell continues to act, and he has several movies in production.

Throughout his decades of acting, Malcolm McDowell has won a dozen awards and has been nominated for several others. Some of his most impressive awards are listed below.

Malcolm McDowell married Mary Steenburgen in 1980. Together, the couple had a son and a daughter, Charles, and Lilly. The couple later divorced in 1990. He then remarried to Kelley Kuhr in 1991. This couple has three children together.