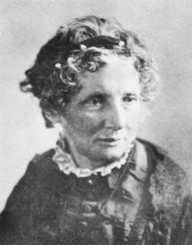 Harriet Beecher Stowe was born on June 14, 1811, in Litchfield, Connecticut, USA. Her parents were Roxana Band Lyman Beecher. Sadly, her mother died when Harriet was just a child. Her father soon remarried, and her father and step-mother raised her. She also had several siblings. She later changed her name to Harriet Beecher Stowe when she married to Calvin Stowe.

As a youth, Harriet Beecher Stowe attended a school run by her sister.: the Litchfield Female Academy. She got a wonderful education for a woman at that time, learning literature and other humanities subjects. She also learned how to knit, cook, and sew.

Harriet Beecher Stowe first began writing while she was in school, but it wasn’t until after school, when she joined the Semicolon Club, that she began to publish her stories. These small stories didn’t catch much attention from the general public.

Stowe’s most famous book, Uncle Tom’s Cabin was published in 1852. This book tells the story of two slave owners that sell two of their slaves, Uncle Tom and Eliza, to a mean slave owner. The slaves then run away to the North, where they can be free. The book is all about the struggle of African Americans, both slave and free. Conflict, love, and death are all serious themes in the book. Many people, including the previous United States President Abraham Lincoln, agreed that the points this book made, and the way that readers reacted to it, could have been a contributing factor to the American Civil War. Southerners hated the book, as it advocated for an end to slavery.

None of Stowe’s books gained more attention than Uncle Tom’s Cabin. Some of her other books are listed below.

The Minister’s Wooing
The Pearl of Orr’s Island: A Story of the Coast of Maine
Dred: A Tale of the Great Dismal Swamp
Palmetto Leaves
The Ghost in the Mill
The First Christmas of New England

Before the American Civil War, Harriet Beecher Stowe was a part of the movement that helped with the Underground Railroad. She helped escaped slaves move from the South, where slavery was still legal, to the Northern United States or to Canada, where slavery was illegal.

Harriet Beecher Stowe was posthumously inducted into the National Women’s Hall of Fame in 1896.

She was a member of the Lane Seminary and the Semicolon Club.

Harriet Beecher Stowe died on July 1, 1896, in Hartford, Connecticut, USA. She was 85 years old when she passed away.

The Episcopal Church has set up a feast day on July 1st to honor Stowe.
A stamp with Stowe’s face on it was circulated in the United States in 2007.