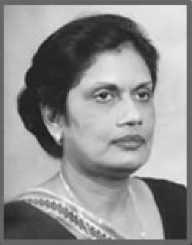 The fifth prime minister of Sri Lanka Chandrika Kumaratunga was born in Colombo, Sri Lanka on the 29 June 1945 to S.W.R.D. Bandaranaike and Sirimavo Bandaranaike. She was born into a politically active family. Her father was a government minister when she was born and later served as Prime Minister. In 1959, he father was assassinated. Following her husband’s assassination Chandrika Kumaratunga became the leader of the Sri Lanka Freedom Party and in 1960, was elected Prime Minister of Ceylon (which later became Sri Lanka).

In the 1980s, Chandrika joined her husband Vijaya Kumaratunga in forming the Sri Lanka People’s Party. Her husband was assassinated in 1988, after which Chandrika went to live in the UK with her two young children.  She worked for the World Institute for Development Economics Research.

Returning to Sri Lanka in the early 1990s she again became a member of the SLFP. The party was

successful in the May 1993 elections, and she was subsequently elected Chief Minister of Western Province of Sri Lanka. Chandrika stood in the 1994 general elections as a member of the People’s Alliance as well as their prime ministerial candidate, and after winning the election, she became Prime Minister. In mid-November 1994, she was appointed the fifth President of Sri Lanka and her mother Sirimavo then stepped into the role of Prime Minister.

One of the major issues was the civil war involved the Tamil Tigers, and during the 1999 presidential election, an assassination attempt was made, and she lost the sight in one eye.
She went on to win the presidential election. In 2001 her People’s Alliance party lost the election and Wickremasinghe was appointed the new Prime Minister. Her relationship with the new government was an uneasy one and in April 2004 when elections were called Mahinda Rajapaksa replaced Wickremesinghe as prime minister.

Chandrika was in office when Sri Lanka was badly affected by the devastating tsunami of 2004. Unable constitutionally to run for a third term, Chandrika left office in 2005.

In 1994 she was elected the fifth prime minister of Sri Lanka and held this position until 2005.

She married actor and politician Vijaya Kumaranatunga in 1978. Ten years later, he was assassinated in front of his wife and children. The assassin was Lionel Ranasinghe.

Her sister Sunethra heads the Sunera Trust. She also had a brother Anura, a politician, who died in 2008.

Her two adult children live in the UK.